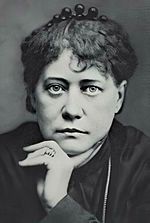 Helena Petrovna Blavatsky (12 August 1831 – 8 May 1891) was a Russian born occultist. At the age of 17 she married a Russian nobleman, Nikifvor Blavatsky. but soon divorced.

In 1875, Blavatsky and Henry Steel Olcott established a research and publishing institute called the Theosophical Society. Blavatsky defined Theosophy as "the archaic Wisdom-Religion, the esoteric doctrine once known in every ancient country having claims to civilization". One of the main purposes of the Theosophical Society was "to form a nucleus of the Universal Brotherhood of Humanity, without distinction of race, creed, sex, caste or color". Madame Blavatsky saw herself as a missionary of this ancient knowledge. She travelled the world and wrote books about the occult including Isis Unveiled and The Secret Doctrine.

The Theosophical Society had an influence on Buddhist modernism and Hindu reform movements, and the spread of those modernised versions in the west. Blavatsky was important in the Western transmission and revival of Theravada Buddhism.

All content from Kiddle encyclopedia articles (including the article images and facts) can be freely used under Attribution-ShareAlike license, unless stated otherwise. Cite this article:
Helena Blavatsky Facts for Kids. Kiddle Encyclopedia.