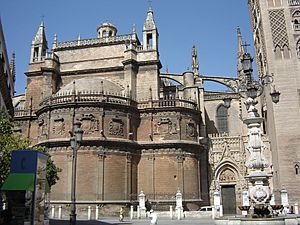 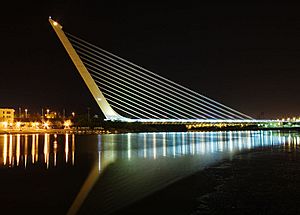 Seville (Spanish: Sevilla) is a big city in the South of Spain, in Europe. A big river called the Guadalquivir River which goes through Seville.

The city of Seville is the capital of the Spanish region called Andalusia and of the province of Sevilla. The people who live in the city are called Sevillanos and there are almost a million of them: 700,000.

A very old story says that the city was started by the famous hero of Greece, named Hercules. The Romans when they came to Spain gave it the Latin name of Hispalis. Over time this changed to be spelled in English as Seville. The Arab Moors took the city when they invaded the country, and you can still see a lot of the buildings they built during their 800 year stay in Spain (711-1492).

In 1992 Seville was the place for the Expo 92. There is a beautiful bridge across the Guadalquivir River called Puente del Alamillo. It was thought up by Santiago Calatrava a famous building expert.

Seville is famous for its hot summer weather.

All content from Kiddle encyclopedia articles (including the article images and facts) can be freely used under Attribution-ShareAlike license, unless stated otherwise. Cite this article:
Seville Facts for Kids. Kiddle Encyclopedia.