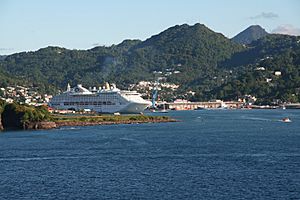 The harbor of Castries, St. Lucia.

Saint Lucia is a tropical island country in the eastern Caribbean Sea. It is a part of the Lesser Antilles, and it is north of the islands of Saint Vincent and the Grenadines and south of Martinique. As of 2010 there are about 174,000 people.

The official language is English. Saint Lucian Creole French (Kwéyòl), which is a French-based Creole is spoken by 95% of the people. About 70% of the people are Roman Catholic.

Two Nobel laureates, Arthur Lewis, an economist, and Derek Walcott, a poet and playwright, have come from the island.

Saint Lucia is a full and participating member of the Caribbean Community (CARICOM), Organisation of Eastern Caribbean States (OECS) and La Francophonie.

Saint Lucia has 11 quarters, or parishes of the island.

The cities in Saint Lucia are:

The volcanic island of Saint Lucia is more mountainous than many other Caribbean islands. The highest point is Mount Gimie, at 950 metres (3,120 ft) above sea level. Two other mountains, the Pitons, form the island's most famous landmark. They are between Soufrière and Choiseul on the western side of the island. Saint Lucia is also one of the few islands in the world that has a drive-in volcano. It is also famous for clear seas and sandy beaches.

The capital city of Saint Lucia is Castries. Over one third of all the people live in the capital. Major towns include Gros Islet, Soufrière and Vieux Fort.

The local climate is tropical. They have northeast trade winds. There is a dry season from December 1 to May 31, and a wet season from June 1 to November 30.

The Windward Islands cricket team includes players from Saint Lucia. They play in the West Indies regional tournament. Darren Sammy is the first Saint Lucian to represent the West Indies. He is the current captain.

Tourism is important to Saint Lucia's economy. There are more tourists during the dry season (January to April). Saint Lucia tends to be popular due to its tropical weather and scenery and its many beaches and resorts.

Other tourist attractions include a drive-in volcano, Sulphur Springs, the Botanical Gardens, the Majestic twin Peaks "The Pitons", a world heritage site, the rain forests, and Pigeon Island National Park.

Most tourists visit Saint Lucia as part of a cruise. Most of their time tends to be spent in Castries, although Soufriere, Marigot Bay and Gros Islet are popular locations to visit.

All content from Kiddle encyclopedia articles (including the article images and facts) can be freely used under Attribution-ShareAlike license, unless stated otherwise. Cite this article:
Saint Lucia Facts for Kids. Kiddle Encyclopedia.