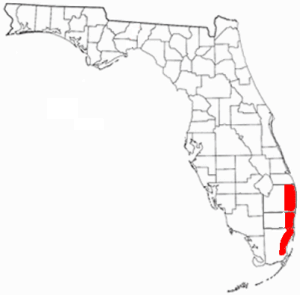 The Gold Coast is a region of the U.S. state of Florida. It is located on the Atlantic coast of South Florida, including the cities of Miami, Ft. Lauderdale and West Palm Beach though its definition has changed over time. One of the best known of Florida's vernacular regions, the name is a reference to the wealth and ritzy tropical lifestyle that characterizes the area.

The Gold Coast is one of several "Coast" regions found in Florida, including the Space Coast, Treasure Coast, Emerald Coast, Nature Coast, Forgotten Coast, the Sun Coast and the First Coast. Like several of the others, it seems to have originated at the time the area first saw major growth. It was well established at the time of a 1982 survey of Florida's vernacular regions by Ary J. Lamme and Raymond K. Oldakowski, who indicate that the name denoted "the high cost of living in these areas, as well as the supposedly glittering lifestyle". At that time, survey respondents from Dade County (now Miami-Dade) in the south, through Broward and Palm Beach Counties and into Martin County in the north, identified their area as the Gold Coast.

A 2007 survey by the same authors found that the Gold Coast was still one of the best known of all of Florida's regions across the state, but that it was then restricted primarily to Miami-Dade and Broward Counties, corresponding to the Miami-Ft. Lauderdale area. People from Palm Beach and Martin Counties chiefly identified their areas as part of a new region, the Treasure Coast, which also included St. Lucie and Indian River Counties. Lamme and Oldakowski note that Palm Beach County remained part of South Florida and the Miami metropolitan area. They suggest that negative connotations that had developed for the Gold Coast and a desire to distinguish the area conceptually from Miami may have led to the emergence of the Treasure Coast.

The Gold Coast, when compared with the image above, shows that the region is primarily made up of the long urban cluster along Florida's southeastern coast, the Miami metropolitan area

All content from Kiddle encyclopedia articles (including the article images and facts) can be freely used under Attribution-ShareAlike license, unless stated otherwise. Cite this article:
Gold Coast (Florida) Facts for Kids. Kiddle Encyclopedia.