McLaren M7A (1968) in the Donington Collection 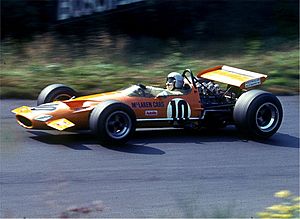 Bruce McLaren driving his own team's car at the 1969 German GP. He got the third most points in Formula One in that year.

Hamilton at the 2010 Malaysian GP

All content from Kiddle encyclopedia articles (including the article images and facts) can be freely used under Attribution-ShareAlike license, unless stated otherwise. Cite this article:
McLaren Facts for Kids. Kiddle Encyclopedia.