The British began to take an active interest in the land around Onondaga Lake in the early 18th century. They befriended the Onondagas by giving them guns, which were highly prized. A British agent, William Johnson, acquired 200,000 acres (810,000,000 m2) of land in the Mohawk country near present day Johnstown, New York. In 1751, Johnson heard that the French intended on securing a military post in the vicinity of the salt springs. He discussed the consequences of that action with the Onondagas and proposed that they grant him rights to all of Onondaga Lake and a two-mile band of land around it. The Onondagas agreed and were paid £350 sterling. 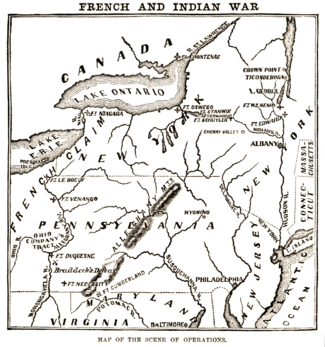 New York and Pennsylvania theaters of the war c.1755

William Johnson wanted either the British or the Colony of New York to reimburse him for his purchase and take control of the land, however, the Colonial Council instead gave the land to Johnson and his heirs. In 1756, Johnson was named sole agent and superintendent of the Six Nations of the Iroquois. By this time the Tuscarora’s had joined the confederacy. Johnson continued to have a positive relationship with the Onondagas and worked to secure their neutrality or allegiance to the British in matters with the French and the Americans.

As the Revolutionary War approached, both the British and the Americans sought Iroquois support. The British succeeded and by the end of the war, only the Oneidas and Tuscaroras had remained neutral or friendly to the Americans.

William Johnson died in 1774, and after the Revolutionary War his rich estates and the land around Onondaga Lake were lost by his heirs and became public lands of New York State.

All content from Kiddle encyclopedia articles (including the article images and facts) can be freely used under Attribution-ShareAlike license, unless stated otherwise. Cite this article:
British in Syracuse, New York Facts for Kids. Kiddle Encyclopedia.