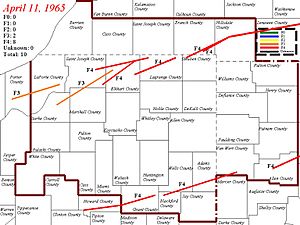 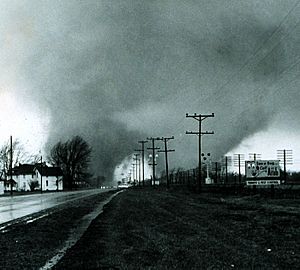 Just before 1 PM CST, a tornado touched down in Cedar County, Iowa. It was rated F4 and was spawned by a supercell thunderstorm around 12:45 PM CST by a news reporter named Martin Jensen of WMT in Cedar Rapids. After he detected the thunderstorm, Jensen called the office in Waterloo and Des Moines to alert them about the storm.

A tornado touched down in Crystal Lake, Illinois, destroying several subdivisions and a junior high school. 5 people were killed, with 3 of the fatalities occurring when a truck was blown into a basement where people were taking shelter. The tornado then destroyed the community of Island Lake, killing one person before lifting around 3:42 PM CST. It was rated F4.

Several tornadoes touched down in Indiana, many of them fatal. The first tornado touched down around 5:30 PM in Koontz Lake, Indiana. The F3 tornado left 10 people dead and 180 injured. The tornado moved northeast, damaging a high school which was under construction. It destroyed 20 homes in the Wyatt area.

Another tornado formed near the St. Joseph-Elkhart County line. It moved east-northeast where it killed a child in Wakarusa. It moved towards Dunlap, and a trailer park. Reporter Paul Huffman captured photographs as the twin-funneled F4 tornado leveled the trailer park. The tornado killed 14 people. An hour and a half later, a second F4 tornado struck Dunlap and devastated the Sunnyside Housing addition and the town's church. 28 people were killed, with another six killed at a truck stop. The Palm Sunday Tornado Memorial Park now exists. Most of the 36 people who died had no warning as high winds from the previous tornado knocked out telephone and power grids. Most of northern Indiana was under a tornado warning also known as a "blanket tornado warning". Both were rated F4.

At 7:30 PM, another massive tornado slammed into Russiaville, leaving several dead. The storm destroyed Alto, before striking Kokomo. As it continued east, it killed 10 more people in Greentown, most who were riding in automobiles. More destruction occurred in Marion before it lifted. In Berne, another tornado cut through the northern part of the city, damaging homes and businesses before it crossed into Ohio destroying more homes before dissipating.

Emergency services could not warn Michigan residents that the tornadoes were headed their way. The radar in Detroit observed thunderstorms over northern Indiana and western lower Michigan moving east-northeast at 70 mph. The tornadoes hit Kent County, just north of Grand Rapids. All but three counties in southern Michigan were hit. Two F4 tornadoes struck Hillsdale County and destroyed 200 cottages along Baw Beese Lake. Many people escaped because they were at church. Lenawee County was hit by two tornadoes in 30 minutes causing numerous fatalities (including a family of six). The local dance pavilion was destroyed after being rebuilt after a fire on Labor Day 1963. One of them destroyed parts of Onsted and in the nearby village of Tipton, which suffered a direct hit. Half of the town's buildings were damaged or destroyed.

The F4 tornadoes also struck Milan (still a village) south of Ann Arbor, straddling the county line between York Township and Milan Township. One tornado destroyed the Wolverinne Plastics building, completely removing the roof. That or the other tornado destroyed the local junior high school and the adjacent senior high school. It became a city in 1967 and opened a middle school in 1969, which replaced the old junior high school, and eventually demolishing the 1900 building.

Tornadoes continued from Indiana to Ohio where additional fatalities occurred. A double tornado occurred in Toledo, Ohio, which devastated the northern parts of the city with F4 damage. Five people were killed when the tornado flipped over a bus.

At 11 PM, a tornado touched down in Lorain County and struck Pittsfield, killing seven and destroying many structures. The same tornado caused severe damage to homes in Grafton. When it neared the Cleveland area, it diverged into two separate paths. Several witnesses saw two funnels merging into one just like the Dunlap, Indiana tornado earlier in the day. Large trees were felled. The storm produced F4 damage in Strongsville, where homes were destroyed. The tornado killed 18 people.

The last killer tornado occurred around 12:30 AM on April 12 killing four people.

All content from Kiddle encyclopedia articles (including the article images and facts) can be freely used under Attribution-ShareAlike license, unless stated otherwise. Cite this article:
1965 Palm Sunday tornado outbreak Facts for Kids. Kiddle Encyclopedia.