List of sister cities in Maryland facts for kids

This is a list of sister states, regions, and cities in the U.S. state of Maryland. Sister cities, known in Europe as town twins, are cities which partner with each other to promote human contact and cultural links, although this partnering is not limited to cities and often includes counties, regions, states and other sub-national entities.

Many Maryland jurisdictions partner with foreign cities through Sister Cities International, an organization whose goal is to, "Promote peace through mutual respect, understanding, and cooperation." The first sister city relationship in Maryland, however, was between Salisbury, Maryland and Salisbury, England, and predated Sister Cities International. Sister cities interact with each other across a broad range of activities, from health care and education to business and the arts. The partnerships in this list vary in how formalized their relationships are. Recently, a number of Maryland cities have partnered with cities in Estonia through a program developed by the Maryland National Guard after Estonia gained its independence from the Soviet Union. 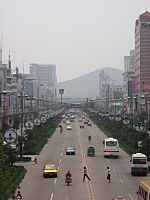 A major street in the city of Huainan, northern Anhui Province, one of Maryland's sister regions.

Devorgilla Bridge in Dumfries, Scotland, one of Annapolis' sister cities. 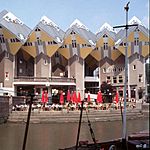 Unique architecture in Rotterdam, Baltimore's sister city in the Netherlands.

A church in Paide, Estonia, sister city to Westminster, Maryland.

All content from Kiddle encyclopedia articles (including the article images and facts) can be freely used under Attribution-ShareAlike license, unless stated otherwise. Cite this article:
List of sister cities in Maryland Facts for Kids. Kiddle Encyclopedia.