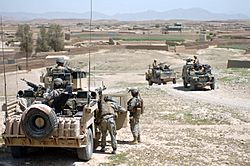 UK and US forces in Afghanistan in 2006

Formal cessation took place on 28 December 2014 via a ceremony in the city of Kabul thus ending the 13 year long war. Thousands of American and other troops continued helping the Afghan government.

All content from Kiddle encyclopedia articles (including the article images and facts) can be freely used under Attribution-ShareAlike license, unless stated otherwise. Cite this article:
War in Afghanistan (2001–14) Facts for Kids. Kiddle Encyclopedia.