List of sister cities in New York facts for kids

This is a list of sister states, regions, and cities in the U.S. state of New York. Sister cities, known in Europe as town twins, are cities which partner with each other to promote human contact and cultural links, although this partnering is not limited to cities and often includes counties, regions, states and other sub-national entities. This article has not been updated to 2016 standards.

Many New York State jurisdictions partner with foreign cities through Sister Cities International, an organization whose goal is to, "Promote peace through mutual respect, understanding, and cooperation." Sister cities interact with each other across a broad range of activities, from health care and education to business and the arts. 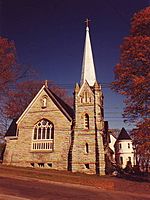 ...is a sister to Cooperstown, the birthplace of baseball.

The Greek city of Rhodes, sister city to the Rochester suburb of Greece.

Puerto Plata in the Dominican Republic, one of Rochester's sisters.

Warwick Castle in Warwick, England, sister to its namesake town in New York.

All content from Kiddle encyclopedia articles (including the article images and facts) can be freely used under Attribution-ShareAlike license, unless stated otherwise. Cite this article:
List of sister cities in New York Facts for Kids. Kiddle Encyclopedia.