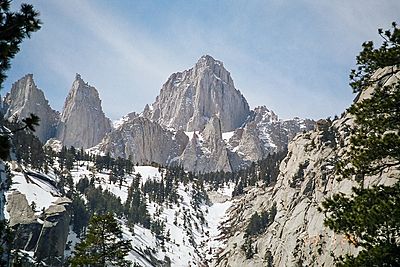 Mount Whitney is the highest summit of the Sierra Nevada, the State of California, and the contiguous United States.

If an elevation or prominence is calculated as a range of values, the arithmetic mean is shown.

Main page: List of the highest major summits of California

All content from Kiddle encyclopedia articles (including the article images and facts) can be freely used under Attribution-ShareAlike license, unless stated otherwise. Cite this article:
List of the major 4000-meter summits of California Facts for Kids. Kiddle Encyclopedia.