List of islands of the British Isles facts for kids 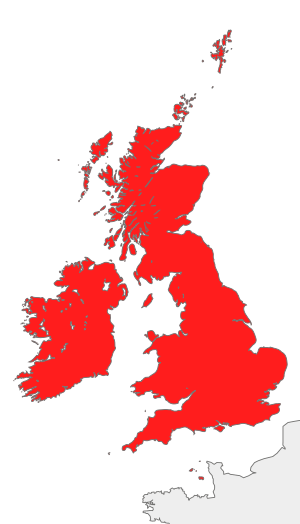 This page is a list of some of the islands that form the British Isles that have an area of one kilometre squared (247 acres) or larger, listing area and population data. The total area of the islands is 314,965 km2 (121,608 sq. mi.). Great Britain accounts for the larger part of this area at 66%, with Ireland accounting for 26%, leaving the remaining 8%—an area of 23,996 km2 (9265 sq. mi.)—comprising thousands of smaller islands. The largest of the other islands are to be found in the Hebrides and the Northern Isles to the north, and Anglesey and the Isle of Man between Great Britain and Ireland. Not included are the Channel Islands which are positioned off the coast of France.

There are 189 permanently inhabited islands in total:

† The Isle of Man and Calf of Man.

The Isle of Man is a Crown dependency.

All content from Kiddle encyclopedia articles (including the article images and facts) can be freely used under Attribution-ShareAlike license, unless stated otherwise. Cite this article:
List of islands of the British Isles Facts for Kids. Kiddle Encyclopedia.