Geography of Texas facts for kids

The geography of Texas is diverse and large. Occupying about 7% of the total water and land area of the U.S., it is the second largest state after Alaska, and is the southernmost part of the Great Plains, which end in the south against the folded Sierra Madre Oriental of Mexico. Texas is in the South Central United States of America, and is considered to form part of the U.S. South and also part of the U.S. Southwest.

By residents, the state is generally divided into North Texas, East Texas, Central Texas, South Texas, West Texas and, sometimes, the Panhandle, but according to the Texas Almanac, Texas has four major physical regions: Gulf Coastal Plains, Interior Lowlands, Great Plains, and Basin and Range Province. This has been cited as the difference between human geography and physical geography, although the fact that Texas was granted the prerogative to divide into as many as five U.S. states may be a historical motive for Texans defining their state as containing exactly five regions.

Some regions in Texas are more associated with the American Southeast (primarily East Texas, Central Texas, and North Texas), while the Panhandle is considered by many to have more in common with parts of the plains Midwest than either the South or Southwest. Geographically and culturally, El Paso is closer to New Mexico or Arizona than it is to Austin or to East Texas. The size of Texas prohibits easy categorization of the entire state wholly in any recognized region of the United States, and even cultural diversity among regions of the state makes it difficult to treat Texas as a region in its own right. 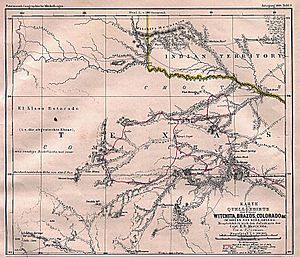 The geographic center of Texas is about 15 miles (24 km) northeast of Brady in northern McCulloch County. Guadalupe Peak, at 8,749 feet (2,666.7 m) above sea level, is the highest point in Texas, the lowest being sea level where Texas meets the Gulf of Mexico. Texas has five state forests and 120 state parks for a total over 605,000 acres (2,450 km2). There are 3,700 named streams and 15 major river systems flowing through 191,000 miles (307,000 km) of Texas. Eventually emptying into seven major estuaries, these rivers support over 212 reservoirs. 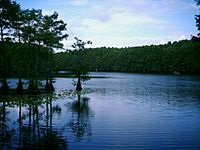 The Gulf Coastal Plains extends from the Gulf of Mexico inland to the Balcones Fault and the Eastern Cross Timbers. This large area, including the Texas barrier islands, stretches from the cities of Paris to San Antonio to Del Rio but shows a large variety in vegetation. With about 20 to over 58 inches (508–1,480 mm) annual rainfall, this is a nearly level, drained plain dissected by streams and rivers flowing into estuaries and marshes. Windblown sands and dunes, grasslands, oak mottes and salt marshes make up the seaward areas. National Parks include Big Thicket National Preserve, Padre Island National Seashore and the Palo Alto Battlefield National Historic Site.

Looking north at the Caprock Escarpment. 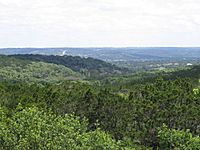 The Great Plains include the Llano Estacado, the Panhandle, Edwards Plateau, Toyah Basin, and the Llano Uplift. It is bordered on the east by the Caprock Escarpment in the panhandle and by the Balcones Fault to the southeast. Cities in this region include Midland and Odessa, Lubbock, and Amarillo. The Hill Country is a popular name for the area of hills along the Balcones Escarpment and is a transitional area between the Great Plains and the Gulf Coastal Plains. With about 15 to 31 inches (380 to 790 mm) annual rainfall, the southern end of the Great Plains are gently rolling plains of shrub and grassland, and home to the dramatic Caprock Canyons and Palo Duro Canyon state parks. The largest concentration of playa lakes in the world (nearly 22,000) is on the Southern High Plains of Texas and Eastern New Mexico.

Texas' blackland prairies were some of the first areas farmed in Texas. Highly expansive clays with characteristic dark coloration, called the Houston Black series, occur on about 1.5 million acres (6,000 km²) extending from north of Dallas south to San Antonio. The Professional Soil Scientists Association of Texas has recommended to the State Legislature that the Houston Black series be designated the State soil. The series was established in 1902. National Parks in this area are the Lyndon B. Johnson National Historical Park and the San Antonio Missions National Historical Park. 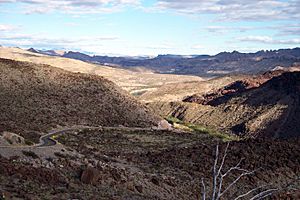 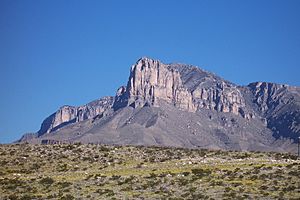 The Trans-Pecos Natural Region has less than 12 inches (300 mm) annual rainfall. The most complex Natural Region, it includes Sand Hills, the Stockton Plateau, desert valleys, wooded mountain slopes and desert grasslands. The Basin and Range Province is in extreme western Texas, west of the Pecos River beginning with the Davis Mountains on the east and the Rio Grande to its west and south. The Trans-Pecos region is the only part of Texas regarded as mountainous and includes seven named peaks in elevation greater than 8,000 feet (2,400 m). This region includes sand hills, desert valleys, wooded mountain slopes and desert grasslands. The vegetation diversity includes at least 268 grass species and 447 species of woody plants. National Parks include the Amistad National Recreation Area, Big Bend National Park, Chamizal National Memorial, Fort Davis National Historic Site, Guadalupe Mountains National Park, and the Rio Grande Wild and Scenic River. This area is part of the Chihuahuan Desert.

Texas is mostly sedimentary rocks, with East Texas underlain by a Cretaceous and younger sequence of sediments, the trace of ancient shorelines east and south until the active continental margin of the Gulf of Mexico is met. This sequence is built atop the subsided crest of the Appalachian Mountains–Ouachita Mountains–Marathon Mountains zone of Pennsylvanian continental collision, which collapsed when rifting in Jurassic time opened the Gulf of Mexico. West from this orogenic crest, which is buried beneath the Dallas–Waco–Austin–San Antonio trend, the sediments are Permian and Triassic in age. Oil is found in the Cretaceous sediments in the east, the Permian sediments in the west, and along the Gulf coast and out on the Texas continental shelf. A few exposures of Precambrian igneous and metamorphic rocks are found in the central and western parts of the state, and Oligocene volcanic rocks are found in far west Texas, in the Big Bend area. A blanket of Miocene sediments known as the Ogallala formation in the western high plains region is an important aquifer. Texas has no active or dormant volcanoes and few earthquakes, being situated far from an active plate tectonic boundary. The Big Bend area is the most seismically active; however, the area is sparsely populated and suffers minimal damages and injuries, and no known fatalities have been attributed to a Texas earthquake. 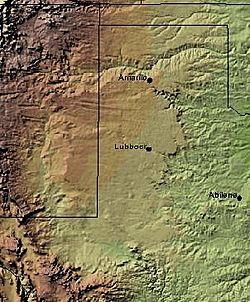 All content from Kiddle encyclopedia articles (including the article images and facts) can be freely used under Attribution-ShareAlike license, unless stated otherwise. Cite this article:
Geography of Texas Facts for Kids. Kiddle Encyclopedia.