This is a list of Muffler Men, large moulded fiberglass sculptures that are placed as advertising icons.

When the 26-foot "Muffler Man" Paul Bunyan was erected in front of a Cheshire lumber business in the 1980s, the town objected to the statue, citing that it was a violated of town codes given its substantial height. Finding no limitation on flagpole height on the books, the owners of the statue replaced Bunyan's axe with an American flag.

Norwich- West Main Street Big Bob, a wayward Connecticut cowboy, has been in Norwich since the mid-1960s. For his first 20 years he was on the other side of town. Back then he belonged to Alex Cohen, who used the Muffler Man to draw visitors to his amusement park. That business eventually closed, and when the owners of Surplus Unlimited -- who were friends with Al -- opened their store in 1982, they bought Big Bob. They had admired him ever since they were kids.

Patriotic Big Bob has held an American flag since his move, and is anchored with cables to the front of the store to prevent people from climbing onto the roof and kicking him over (It's been attempted). At night he is illuminated by a spotlight. Surplus Unlimited keeps Big Bob in good repair, featuring him in its advertising and as artwork on the side of its delivery truck in the parking lot. 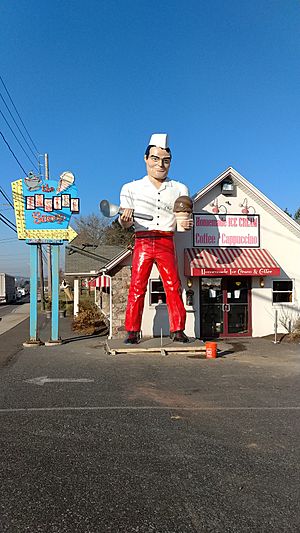 Giant chip at the Inside Scoop Ice Cream Shop

There is one on a roof of the SSA Marine building located at 1105 Hewitt Ave, in Everett Washington at the end of Hewitt Ave.

There is a 22'tall Cowboy muffler man located in Pomeroy WA on HWY12 on the lower East side of town. He is on private property in public view.

All content from Kiddle encyclopedia articles (including the article images and facts) can be freely used under Attribution-ShareAlike license, unless stated otherwise. Cite this article:
List of Muffler Men Facts for Kids. Kiddle Encyclopedia.