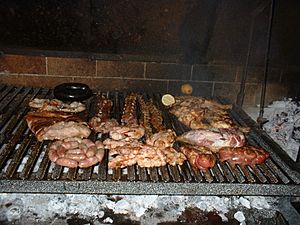 Argentine food is a mix of foods from various cultures. There are Mediterranean influences (Italian, Spanish) and indigenous peoples.

There are many agricultural products that are available in the country. Beef eating has averaged 100 kg (220 lbs) per capita, consumption averaged 67.7 kg (149 lbs) in 2007. Beyond asado (the Argentine barbecue), no other dish matches the national identity. The country's vast area, and cultural diversity, have led to a local cuisine of various dishes.

Argentine people have a reputation for their love of eating. Social gatherings are commonly centered on sharing a meal. Invitations to have dinner at home is generally viewed as a symbol of friendship, warmth, and integration. Sunday family lunch is considered the most significant meal of the week, whose highlights often include asado or pasta.

Argentine restaurants include a great variety of cuisines, prices, and flavors. Large cities tend to host everything from high-end international cuisine, to bodegones (inexpensive traditional hidden taverns), less stylish restaurants, and bars and canteens offering a range of dishes at affordable prices.

All content from Kiddle encyclopedia articles (including the article images and facts) can be freely used under Attribution-ShareAlike license, unless stated otherwise. Cite this article:
Argentine food Facts for Kids. Kiddle Encyclopedia.