Southeast Asia or Southeastern Asia is a subregion of Asia, consisting of the regions that are geographically south of China, east of the Indian subcontinent and north-west of Australia. Southeast Asia is bordered to the north by East Asia, to the west by South Asia and the Bay of Bengal, to the east by Oceania and the Pacific Ocean, and to the south by Australia and the Indian Ocean. The region is the only part of Asia that lies partly within the Southern Hemisphere, although the majority of it is in the Northern Hemisphere. In contemporary definition, Southeast Asia consists of two geographic regions:

The region lies near the intersection of geological plates, with both heavy seismic and volcanic activities. The Sunda Plate is the main plate of the region, featuring almost all Southeast Asian countries except Myanmar, northern Thailand, northern Laos, northern Vietnam, and northern Luzon of the Philippines. The mountain ranges in Myanmar, Thailand, and peninsular Malaysia are part of the Alpide belt, while the islands of the Philippines are part of the Pacific Ring of Fire. Both seismic belts meet in Indonesia, causing the region to have relatively high occurrences of earthquakes and volcanic eruptions.

Southeast Asia covers about 4.5 million km2 (1.7 million mi2), which is 10.5% of Asia or 3% of earth's total land area. Its total population is more than 655 million, about 8.5% of the world's population. It is the third most populous geographical region in the world after South Asia and East Asia. The region is culturally and ethnically diverse, with hundreds of languages spoken by different ethnic groups. Ten countries in the region are members of ASEAN, a regional organization established for economic, political, military, educational and cultural integration amongst its members. 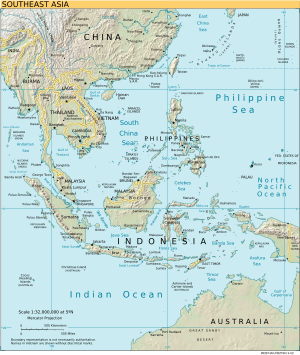 Indonesia is the largest country in Southeast Asia and it also the largest archipelago in the world by size (according to the CIA World Factbook). Geologically. the Indonesian archipelago is one of the most volcanically active regions in the world. Geological uplifts in the region have also produced some impressive mountains, culminating in Puncak Jaya in Papua, Indonesia at 5,030 metres (16,500 feet), on the island of New Guinea; it is the only place where ice glaciers can be found in Southeast Asia. The highest mountain in Southeast Asia is Hkakabo Razi at 5,967 meters and can be found in northern Burma sharing the same range of its parent peak, Mount Everest.

The South China Sea is the major body of water within Southeast Asia. The Philippines, Vietnam, Malaysia, Brunei, Indonesia, and Singapore, have integral rivers that flow into the South China Sea.

Mayon Volcano, despite being dangerously active, holds the record of the world's most perfect cone which is built from past and continuous eruption.

Southeast Asia is bounded to the southeast by the Australian continent, a boundary which runs through Indonesia. But a cultural touch point lies between Papua New Guinea and the Indonesian region of the Papua and West Papua, which shares the island of New Guinea with Papua New Guinea. 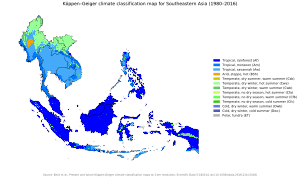 The climate in Southeast Asia is mainly tropical–hot and humid all year round with plentiful rainfall. Northern Vietnam and the Myanmar Himalayas are the only regions in Southeast Asia that feature a subtropical climate, which has a cold winter with snow. The majority of Southeast Asia has a wet and dry season caused by seasonal shift in winds or monsoon. The tropical rain belt causes additional rainfall during the monsoon season. The rain forest is the second largest on earth (with the Amazon being the largest). An exception to this type of climate and vegetation is the mountain areas in the northern region, where high altitudes lead to milder temperatures and drier landscape. Other parts fall out of this climate because they are desert like. 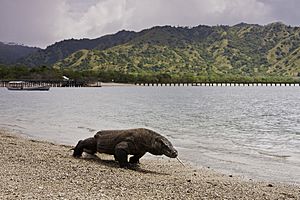 The vast majority of Southeast Asia falls within the warm, humid tropics, and its climate generally can be characterised as monsoonal. The animals of Southeast Asia are diverse; on the islands of Borneo and Sumatra, the orangutan, the Asian elephant, the Malayan tapir, the Sumatran rhinoceros and the Bornean clouded leopard can also be found. Six subspecies of the binturong or bearcat exist in the region, though the one endemic to the island of Palawan is now classed as vulnerable.

Tigers of three different subspecies are found on the island of Sumatra (the Sumatran tiger), in peninsular Malaysia (the Malayan tiger), and in Indochina (the Indochinese tiger); all of which are endangered species.

The Komodo dragon is the largest living species of lizard and inhabits the islands of Komodo, Rinca, Flores, and Gili Motang in Indonesia. 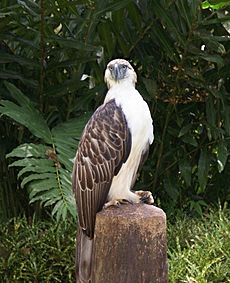 The wild Asian water buffalo, and on various islands related dwarf species of Bubalus such as anoa were once widespread in Southeast Asia; nowadays the domestic Asian water buffalo is common across the region, but its remaining relatives are rare and endangered.

The mouse deer, a small tusked deer as large as a toy dog or cat, mostly can be found on Sumatra, Borneo (Indonesia) and in Palawan Islands (Philippines). The gaur, a gigantic wild ox larger than even wild water buffalo, is found mainly in Indochina. There is very little scientific information available regarding Southeast Asian amphibians.

Birds such as the peafowl and drongo live in this subregion as far east as Indonesia. The babirusa, a four-tusked pig, can be found in Indonesia as well. The hornbill was prized for its beak and used in trade with China. The horn of the rhinoceros, not part of its skull, was prized in China as well.

The Indonesian Archipelago is split by the Wallace Line. This line runs along what is now known to be a tectonic plate boundary, and separates Asian (Western) species from Australasian (Eastern) species. The islands between Java/Borneo and Papua form a mixed zone, where both types occur, known as Wallacea. As the pace of development accelerates and populations continue to expand in Southeast Asia, concern has increased regarding the impact of human activity on the region's environment. A significant portion of Southeast Asia, however, has not changed greatly and remains an unaltered home to wildlife. The nations of the region, with only few exceptions, have become aware of the need to maintain forest cover not only to prevent soil erosion but to preserve the diversity of flora and fauna. Indonesia, for example, has created an extensive system of national parks and preserves for this purpose. Even so, such species as the Javan rhinoceros face extinction, with only a handful of the animals remaining in western Java. 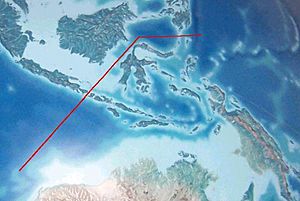 Wallace's hypothetical line divide Indonesian Archipelago into 2 types of fauna, Australasian and Southeast Asian fauna. The deep water of the Lombok Strait between the islands of Bali and Lombok formed a water barrier even when lower sea levels linked the now-separated islands and landmasses on either side.

The shallow waters of the Southeast Asian coral reefs have the highest levels of biodiversity for the world's marine ecosystems, where coral, fish and molluscs abound. According to Conservation International, marine surveys suggest that the marine life diversity in the Raja Ampat (Indonesia) is the highest recorded on Earth. Diversity is considerably greater than any other area sampled in the Coral Triangle composed of Indonesia, Philippines, and Papua New Guinea. The Coral Triangle is the heart of the world's coral reef biodiversity, the Verde Passage is dubbed by Conservation International as the world's "center of the center of marine shorefish biodiversity". The whale shark, the world's largest species of fish and 6 species of sea turtles can also be found in the South China Sea and the Pacific Ocean territories of the Philippines.

The trees and other plants of the region are tropical; in some countries where the mountains are tall enough, temperate-climate vegetation can be found. These rainforest areas are currently being logged-over, especially in Borneo.

While Southeast Asia is rich in flora and fauna, Southeast Asia is facing severe deforestation which causes habitat loss for various endangered species such as orangutan and the Sumatran tiger. Predictions have been made that more than 40% of the animal and plant species in Southeast Asia could be wiped out in the 21st century. At the same time, haze has been a regular occurrence. The two worst regional hazes were in 1997 and 2006 in which multiple countries were covered with thick haze, mostly caused by "slash and burn" activities in Sumatra and Borneo. In reaction, several countries in Southeast Asia signed the ASEAN Agreement on Transboundary Haze Pollution to combat haze pollution.

The 2013 Southeast Asian Haze saw API levels reach a hazardous level in some countries. Muar experienced the highest API level of 746 on 23 June 2013 at around 7 am.

All content from Kiddle encyclopedia articles (including the article images and facts) can be freely used under Attribution-ShareAlike license, unless stated otherwise. Cite this article:
Southeast Asia Facts for Kids. Kiddle Encyclopedia.