Nebraska is a state that lies in both the Great Plains and the Midwestern United States. The state is bordered by South Dakota to the north, Iowa to the east and Missouri to the southeast, both across the Missouri River, Kansas to the south, Colorado to the southwest and Wyoming to the west. Its area is just over 77,220 sq mi (200,000 km2) with almost 1.9 million people. Its state capital is Lincoln. Its largest city is Omaha, which is on the Missouri River.

Indigenous peoples including Omaha, Missouria, Ponca, Pawnee, Otoe, and various branches of the Lakota (Sioux) tribes lived in the region of present-day Nebraska for thousands of years before European exploration. The state is crossed by many historic trails and was explored by the Lewis and Clark Expedition.

The state has a large agriculture sector and is a major producer of beef, pork, corn, and soybeans.

Two major climatic zones are represented in Nebraska: the eastern half of the state has a humid continental climate, and the western half, a semi-arid climate. The entire state has wide variations between winter and summer temperatures, and violent thunderstorms and tornadoes happen primarily during the spring and summer, though these storms can also occur in the autumn. 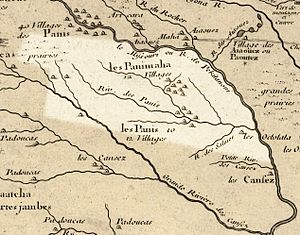 Nebraska in 1718, Guillaume de L'Isle map, with the approximate area of the future state highlighted.

Indigenous peoples lived in the region of present-day Nebraska for thousands of years before European exploration. The historic tribes in the state included the Omaha, Missouria, Ponca, Pawnee, Otoe, and various branches of the Lakota (Sioux), some of which migrated from eastern areas into this region.

When European exploration, trade, and settlement began, both Spain and France sought to control the region.

In the 1690s, Spain established trade connections with the Apaches, whose territory then included western Nebraska. By 1703, France had developed a regular trade with the native peoples along the Missouri River in Nebraska, and by 1719 had signed treaties with several of these peoples. After war broke out between the two countries, Spain dispatched an armed expedition to Nebraska under Lieutenant General Pedro de Villasur in 1720. The party was attacked and destroyed near present-day Columbus by a large force of Pawnees and Otoes, both allied to the French. The massacre of the Villasur expedition effectively put an end to Spanish exploration of Nebraska for the remainder of the 18th century.

In 1762, during the Seven Years' War, France ceded the Louisiana territory to Spain. France's withdrawal from the area left Britain and Spain competing for dominance along the Mississippi; by 1773, the British were trading with the native peoples of Nebraska. In response, Spain dispatched two trading expeditions up the Missouri in 1794 and 1795; the second, under James Mackay, established the first European settlement in Nebraska near the mouth of the Platte. Later that year, Mackay's party built a trading post, dubbed Fort Carlos IV (Fort Charles), near present-day Homer.

European-American settlement did not begin in any numbers until after 1848 and the California Gold Rush.

On May 30, 1854, the US Congress created the Kansas and the Nebraska territories, divided by the Parallel 40° North, under the Kansas–Nebraska Act. The Nebraska Territory included parts of the current states of Colorado, North Dakota, South Dakota, Wyoming, and Montana. The territorial capital of Nebraska was Omaha. 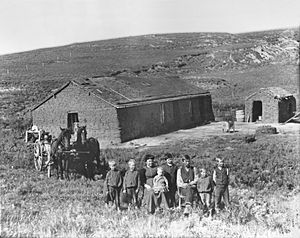 Homesteaders in central Nebraska in 1888.

In the 1860s, after the U.S. government forced many of the Native American tribes to cede their lands and settle on reservations, it opened large tracts of land to agricultural development by Europeans and Americans. Under the Homestead Act, thousands of settlers migrated into Nebraska to claim free land granted by the federal government. Because so few trees grew on the prairies, many of the first farming settlers built their homes of sod, as had the Native Americans such as the Omaha. The first wave of settlement gave the territory a sufficient population to apply for statehood.

Nebraska became the 37th state on March 1, 1867, and the capital was moved from Omaha to the center at Lancaster, later renamed Lincoln after the recently assassinated President of the United States, Abraham Lincoln. The battle of Massacre Canyon on August 5, 1873, was the last major battle between the Pawnee and the Sioux.

During the 1870s to the 1880s, Nebraska experienced a large growth in population. Several factors contributed to attracting new residents. The first was that the vast prairie land was perfect for cattle grazing. This helped settlers to learn the unfamiliar geography of the area. The second factor was the invention of several farming technologies. Agricultural inventions such as barbed wire, wind mills, and the steel plow, combined with good weather, enabled settlers to make use of Nebraska as prime farming land. By the 1880s, Nebraska's population had soared to more than 450,000 people. The Arbor Day holiday was founded in Nebraska City by territorial governor J. Sterling Morton.

In the late nineteenth century, many African Americans migrated from the South to Nebraska as part of the Great Migration, primarily to Omaha which offered working class jobs in meat packing, the railroads and other industries. Omaha has a long history of civil rights activism. Blacks encountered discrimination from other Americans in Omaha and especially from recent European immigrants, ethnic whites who were competing for the same jobs. In 1912, African Americans founded the Omaha chapter of the National Association for the Advancement of Colored People to work for improved conditions in the city and state.

Since the 1960s, Native American activism in the state has increased, both through open protest, activities to build alliances with state and local governments, and in the slower, more extensive work of building tribal institutions and infrastructure. Native Americans in federally recognized tribes have pressed for self-determination, sovereignty and recognition. They have created community schools to preserve their cultures, as well as tribal colleges and universities. Tribal politicians have also collaborated with state and county officials on regional issues.

For more details, see List of counties in Nebraska 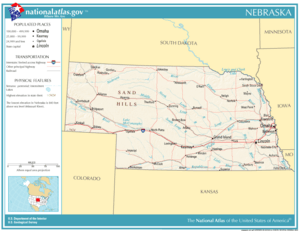 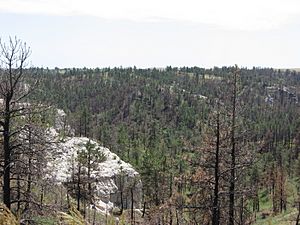 Forested hills in the Pine Ridge region of Nebraska.
Animation begins with a wide view of the entire United States and then zooms down to an area in Nebraska where water usage studies have been carried out.

The state is bordered by South Dakota to the north; Iowa to the east and Missouri to the southeast, across the Missouri River; Kansas to the south; Colorado to the southwest; and Wyoming to the west. The state has 93 counties; it occupies the central portion of the Frontier Strip. Nebraska is split into two time zones, with the state's eastern half observing Central Time and the western half observing Mountain Time. Three rivers cross the state from west to east. The Platte River, formed by the confluence of the North Platte and the South Platte, runs through the state's central portion, the Niobrara River flows through the northern part, and the Republican River runs across the southern part.

Nebraska is composed of two major land regions: the Dissected Till Plains and the Great Plains. The easternmost portion of the state was scoured by Ice Age glaciers; the Dissected Till Plains were left after the glaciers retreated. The Dissected Till Plains is a region of gently rolling hills; Omaha and Lincoln are in this region. The Great Plains occupy most of western Nebraska, with the region consisting of several smaller, diverse land regions, including the Sandhills, the Pine Ridge, the Rainwater Basin, the High Plains and the Wildcat Hills. Panorama Point, at 5,424 feet (1,653 m), is Nebraska's highest point; though despite its name and elevation, it is a relatively low rise near the Colorado and Wyoming borders. A past Nebraska tourism slogan was "Where the West Begins"; locations given for the beginning of the "West" include the Missouri River, the intersection of 13th and O Streets in Lincoln (where it is marked by a red brick star), the 100th meridian, and Chimney Rock. 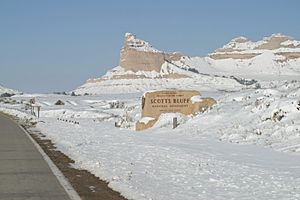 Two major climatic zones are represented in Nebraska: the eastern half of the state has a humid continental climate, and the western half, a semi-arid climate. The entire state experiences wide seasonal variations in temperature and precipitation. Average temperatures are fairly uniform across Nebraska, with hot summers and generally cold winters.

Average annual precipitation decreases east to west from about 31.5 inches (800 mm) in the southeast corner of the state to about 13.8 inches (350 mm) in the Panhandle. Humidity also decreases significantly from east to west. 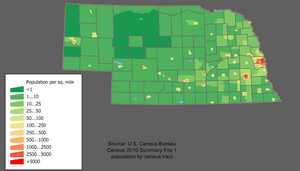 Nebraska has the largest Czech American and non-Mormon Danish American population (as a percentage of the total population) in the nation. German Americans are the largest ancestry group in most of the state, particularly in the eastern counties. Thurston County (made up entirely of the Omaha and Winnebago reservations) has an American Indian majority, and Butler County is one of only two counties in the nation with a Czech-American plurality.

Eighty-nine percent of the cities in Nebraska have fewer than 3,000 people. Nebraska shares this characteristic with five other Midwestern states: Kansas, Oklahoma, North Dakota and South Dakota, and Iowa. Hundreds of towns have a population of fewer than 1,000. Regional population declines have forced many rural schools to consolidate. 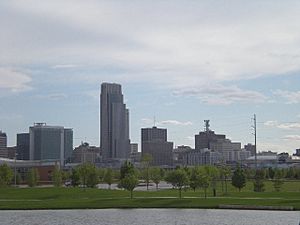 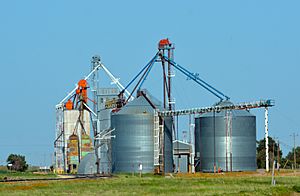 Nebraska has a large agriculture sector, and is a major producer of beef, pork, corn (maize), soybeans, and sorghum. Other important economic sectors include freight transport (by rail and truck), manufacturing, telecommunications, information technology, and insurance.

Kool-Aid was created in 1927 by Edwin Perkins in the city of Hastings, which celebrates the event the second weekend of every August with Kool-Aid Days, and Kool-Aid is the official soft drink of Nebraska.

CliffsNotes were developed by Clifton Hillegass of Rising City. He adapted his pamphlets from the Canadian publications, Coles Notes.

Omaha is home to Berkshire Hathaway, whose Chief executive officer (CEO), Warren Buffett, was ranked in March 2009 by Forbes magazine as the second richest person in the world. The city is also home to Mutual of Omaha, InfoUSA, TD Ameritrade, West Corporation, Valmont Industries, Woodmen of the World, Kiewit Corporation, Union Pacific Railroad, and Gallup. Ameritas Life Insurance Corp., Nelnet, Sandhills Publishing Company, and Duncan Aviation are based in Lincoln; The Buckle is based in Kearney. Sidney is the national headquarters for Cabela's, a specialty retailer of outdoor goods. 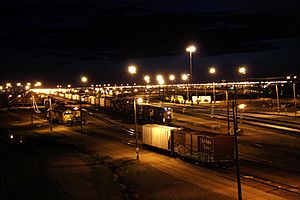 The world's largest train yard the Bailey Yard at night

The Vise-Grip was invented by William Petersen in 1924, and was manufactured in De Witt until the plant was closed and moved to China in late 2008.

Lincoln's Kawasaki Motors Manufacturing is the only Kawasaki plant in the world to produce the Jet Ski, All-terrain vehicle (ATV), and Mule lines of product. The facility employs more than 1200 people.

The Spade Ranch, in the Sandhills, is one of Nebraska's oldest and largest beef cattle operations.

The Union Pacific Railroad, headquartered in Omaha, was incorporated on July 1, 1862, in the wake of the Pacific Railway Act of 1862. Bailey Yard, in North Platte, is the largest railroad classification yard in the world. The route of the original transcontinental railroad runs through the state.

Other major railroads with operations in the state are: Amtrak; BNSF Railway; Canadian Pacific Railway; and Iowa Interstate Railroad.

All content from Kiddle encyclopedia articles (including the article images and facts) can be freely used under Attribution-ShareAlike license, unless stated otherwise. Cite this article:
Nebraska Facts for Kids. Kiddle Encyclopedia.