This is a comprehensive listing of the bird species recorded in Isle Royale National Park, which is in the U.S. state of Michigan. Unless otherwise noted, this list is based on one published by the National Park Service (NPS).

This list is presented in the taxonomic sequence of the Check-list of North and Middle American Birds, 7th edition through the 61st Supplement, published by the American Ornithological Society (AOS). Common and scientific names are also those of the Check-list, except that the common names of families are from the Clements taxonomy because the AOS list does not include them.

This list contains 256 species. Unless otherwise noted, all are considered to occur regularly in Isle Royale National Park as permanent residents, summer or winter visitors, or migrants. The tags below are used to designate the abundance of some less-common species. 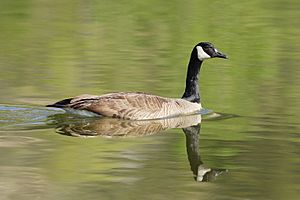 The family Anatidae includes the ducks and most duck-like waterfowl, such as geese and swans. These birds are adapted to an aquatic existence with webbed feet, bills which are flattened to a greater or lesser extent, and feathers that are excellent at shedding water due to special oils.

The family Cuculidae includes cuckoos, roadrunners, and anis. These birds are of variable size with slender bodies, long tails, and strong legs. 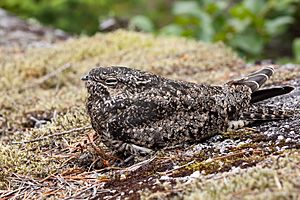 Nightjars are medium-sized nocturnal birds that usually nest on the ground. They have long wings, short legs, and very short bills. Most have small feet, of little use for walking, and long pointed wings. Their soft plumage is cryptically colored to resemble bark or leaves.

The swifts are small birds which spend the majority of their lives flying. These birds have very short legs and never settle voluntarily on the ground, perching instead only on vertical surfaces. Many swifts have very long, swept-back wings which resemble a crescent or boomerang. 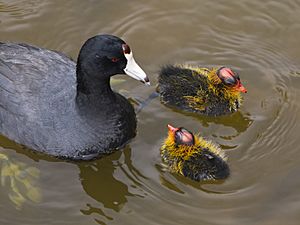 Rallidae is a large family of small to medium-sized birds which includes the rails, crakes, coots, and gallinules. The most typical family members occupy dense vegetation in damp environments near lakes, swamps, or rivers. In general they are shy and secretive birds, making them difficult to observe. Most species have strong legs and long toes which are well adapted to soft uneven surfaces. They tend to have short, rounded wings and tend to be weak fliers.

Cranes are large, long-legged, and long-necked birds. Unlike the similar-looking but unrelated herons, cranes fly with necks outstretched, not pulled back. Most have elaborate and noisy courting displays or "dances". 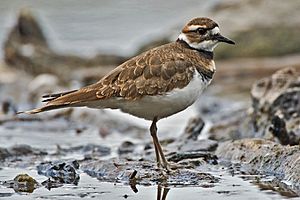 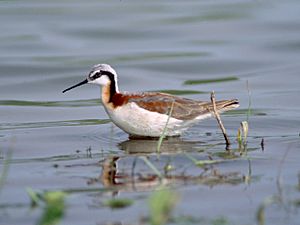 Scolopacidae is a large diverse family of small to medium-sized shorebirds including the sandpipers, curlews, godwits, shanks, tattlers, woodcocks, snipes, dowitchers, and phalaropes. The majority of these species eat small invertebrates picked out of the mud or soil. Different lengths of legs and bills enable multiple species to feed in the same habitat, particularly on the coast, without direct competition for food.

Skuas and jaegers are in general medium to large birds, typically with gray or brown plumage, often with white markings on the wings. They have longish bills with hooked tips and webbed feet with sharp claws. They look like large dark gulls, but have a fleshy cere above the upper mandible. They are strong, acrobatic fliers. 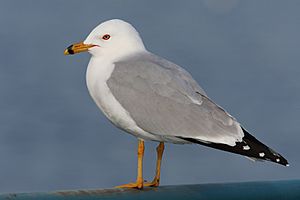 Laridae is a family of medium to large seabirds and includes gulls, terns, kittiwakes, and skimmers. They are typically gray or white, often with black markings on the head or wings. They have stout, longish bills and webbed feet.

Loons are aquatic birds the size of a large duck, to which they are unrelated. Their plumage is largely gray or black, and they have spear-shaped bills. Loons swim well and fly adequately, but are almost hopeless on land, because their legs are placed towards the rear of the body.

Cormorants are medium-to-large aquatic birds, usually with mainly dark plumage and areas of colored skin on the face. The bill is long, thin, and sharply hooked. Their feet are four-toed and webbed, a distinguishing feature among the order Suliformes.

Pelicans are very large water birds with a distinctive pouch under their beak. Like other birds in the order Pelecaniformes, they have four webbed toes. 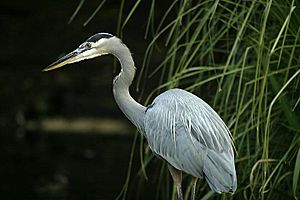 The family Ardeidae contains the herons, egrets, and bitterns. Herons and egrets are medium to large wading birds with long necks and legs. Bitterns tend to be shorter necked and more secretive. Members of Ardeidae fly with their necks retracted, unlike other long-necked birds such as storks, ibises, and spoonbills.

Pandionidae is a monotypic family of fish-eating birds of prey, possessing a very large, powerful hooked beak for tearing flesh from their prey, strong legs, powerful talons, and keen eyesight.

Accipitridae is a family of birds of prey, which includes hawks, eagles, kites, harriers, and Old World vultures. These birds have very large powerful hooked beaks for tearing flesh from their prey, strong legs, powerful talons, and keen eyesight.

Typical owls are small to large solitary nocturnal birds of prey. They have large forward-facing eyes and ears, a hawk-like beak, and a conspicuous circle of feathers around each eye called a facial disk

Woodpeckers are small to medium-sized birds with chisel-like beaks, short legs, stiff tails, and long tongues used for capturing insects. Some species have feet with two toes pointing forward and two backward, while several species have only three toes. Many woodpeckers have the habit of tapping noisily on tree trunks with their beaks.

Falconidae is a family of diurnal birds of prey, notably the falcons and caracaras. They differ from hawks, eagles, and kites in that they kill with their beaks instead of their talons.

Shrikes are passerine birds known for their habit of catching other birds and small animals and impaling the uneaten portions of their bodies on thorns. A shrike's beak is hooked, like that of a typical bird of prey.

The vireos are a group of small to medium-sized passerine birds restricted to the New World. They are typically greenish in color and resemble wood warblers apart from their heavier bills.

The family Corvidae includes crows, ravens, jays, choughs, magpies, treepies, nutcrackers, and ground jays. Corvids are above average in size among the Passeriformes, and some of the larger species show high levels of intelligence. Seven species have been recorded in Michigan.

Larks are small terrestrial birds with often extravagant songs and display flights. Most larks are fairly dull in appearance. Their food is insects and seeds.

The Paridae are mainly small stocky woodland species with short stout bills. Some have crests. They are adaptable birds, with a mixed diet including seeds and insects.

Nuthatches are small woodland birds. They have the unusual ability to climb down trees head first, unlike other birds which can only go upwards. Nuthatches have big heads, short tails, and powerful bills and feet.

Wrens are small and inconspicuous birds, except for their loud songs. They have short wings and thin down-turned bills. Several species often hold their tails upright. All are insectivorous.

The kinglets are a small family of birds which resemble the titmice. They are very small insectivorous birds in the genus Regulus. The adults have colored crowns, giving rise to their names.

The mimids are a family of passerine birds which includes thrashers, mockingbirds, tremblers and the New World catbirds. These birds are notable for their vocalization, especially their remarkable ability to mimic a wide variety of birds and other sounds heard outdoors. The species tend towards dull grays and browns in their appearance.

The waxwings are a group of birds with soft silky plumage and unique red tips to some of the wing feathers. In the Bohemian and cedar waxwings, these tips look like sealing wax and give the group its name. These are arboreal birds of northern forests. They live on insects in summer and berries in winter. 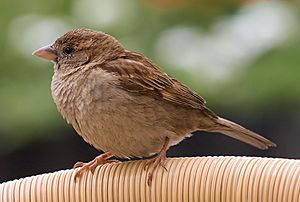 Motacillidae is a family of small passerine birds with medium to long tails. They include the wagtails, longclaws, and pipits. They are slender ground-feeding insectivores of open country.

The Calcariidae are a group of passerine birds that were traditionally grouped with the New World sparrows, but differ in a number of respects and are usually found in open grassy areas.

Until 2017, these species were considered part of the family Emberizidae. Most of the species are known as sparrows, but these birds are not closely related to the Old World sparrows which are in the family Passeridae. Many of these have distinctive head patterns.

This species was historically placed in the wood-warblers (Parulidae) but nonetheless most authorities were unsure if it belonged there. It was placed in its own family in 2017.

The icterids are a group of small to medium-sized, often colorful passerine birds restricted to the New World and include the grackles, New World blackbirds, and New World orioles. Most species have black as a predominant plumage color, often enlivened by yellow, orange, or red.

The wood-warblers are a group of small often colorful passerine birds restricted to the New World. Most are arboreal, but some like the ovenbird and the two waterthrushes, are more terrestrial. Most members of this family are insectivores.

The cardinals are a family of robust seed-eating birds with strong bills. They are typically associated with open woodland. The sexes usually have distinct plumages.

All content from Kiddle encyclopedia articles (including the article images and facts) can be freely used under Attribution-ShareAlike license, unless stated otherwise. Cite this article:
List of birds of Isle Royale National Park Facts for Kids. Kiddle Encyclopedia.