Bangladesh (officially called People's Republic of Bangladesh) is a country in South Asia. It is next to the North-east Indian provincial regions of India, which converges with Southeast Asia to the east. Its full name is The People's Republic of Bangla-Desh. The capital and the largest city is Dhaka (also spelled 'Dacca'). Bangladesh is surrounded on all three sides by the Republic of India (Bharat), and Myanmar (Burma) on the south-eastern corner, it is near the People's Republic of China, Bhutan, Sikkim and Nepal. Its independence was fully realised after it declared it self as independent most of 1971 from Pakistan after a bloody war in which over a million people died. Later by Indian military intervention, by that time the provisional government went into exile in Calcutta, Bengal (India) which they considered their homeland to be under Pakistani military occupation. After the Instrument of Surrender, the Bengali peoples became a sovereign nation and when its founder was released from political imprisonment had returned in 1972. Present-day Bangladesh has an area of 56,977 mi² or (147,570 km²).

The local currency is called Taka. The official language is Bengali.

There are two main rivers in Bangladesh, the Ganges and Brahmaputra Rivers are holy to Hindus. There are often floods because of these two rivers. 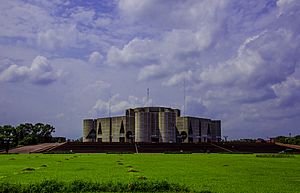 The delta and surrounding hills has been inhabited for hundreds of generations (thousands of years). The area supported agriculture very early on. About 500 BC there was a shift to growing rice. This led to the development of urban areas. Because there were no stone quarries in the area houses were built of wood and mud (including adobe). Because of the monsoon climate very little evidence of the earliest inhabitants remains. From about 300 BC to the 1700s AD the Bengal delta saw the development of writing, the Bengali language, religions and the rise and fall of states. By the 1500s, the area was prosperous and even peasants had plenty to eat.

For much of its history the area was simply called "Bengal" and was considered a part of India. The last few centuries several foreign powers involved themselves with the area resulting in several wars. The 20th century brought more wars, genocide, and political states. Bengal was under British rule from 1757–1947. It was a part of British India. In 1947 East Bengal and West Pakistan separated from India and formed a new country called Pakistan. But the east and west provinces were on either side of India and separated by 930 miles (1,500 km). In 1949 the Bangladesh Awami League formed to favor separation between east and west Pakistan. In 1955 East Bengal was renamed East Pakistan. Dacca was then the legislative capital of Pakistani Bengal provincial region. The peoples of East Pakistan were mostly ethnic Bengalis who had a different language and culture to the people of western Pakistan. These differences eventually led to the Bangladesh Liberation War. On 16 December 1971, Bangladesh gained independence, with the help of allied forces against West Pakistani forces.

After the birth of Bangladesh, Bangla replaced Urdu and English as the sole national and official language, and was the language taught in schools and used in business and government. The Bangla Academy was important in this change. In the 1980s, British-style education was maintained through private English-language institutions attended by upper class children. English continued to be taught in higher education and was offered as a subject for university degrees.

At first, Arabic also lost ground in independent Bangladesh. This trend ended in the late 1970s, however, after Bangladesh strengthened its ties with Saudi Arabia and other oil-rich, Arabic-speaking countries. An unsuccessful attempt was made in 1983 to introduce Arabic as a required language in primary and secondary levels. Arabic is widely studied in Madrassas and Islamic institutions around the country for better understanding of the Quran, Hadith and any other Islamic texts.

Despite many years of independence, Bangladesh is still a poor country and has problems with corruption and political troubles as the other country have. Presently more than half of the people can read and write.

Bangladesh has heavy cyclones and natural disasters, due to this many lives are often lost. The country is one of the most densely populated in the world. Cyclones are very common in the Bay of Bengal during the middle of the year, particularly in the south of country in areas like Sundarban, Chittagong, Cox's Bazaar,or in neighboring Myanmar and Republic of India. Despite the many storms, Bangladesh does not have a very effective storm prevention system, and cyclones usually inflict heavy damage.

Bangladesh is in the Ganges Delta. This is where the Ganges, Brahmaputra, and Meghna come together. Most parts of Bangladesh are less than 12 m (39.4 ft) above the sea level. The highest point in Bangladesh is in Mowdok range at 1,052 m (3,451 ft) in the Chittagong Hill Tracts to the southeast of the country. Cox's Bazar, south of the city of Chittagong, has a beach that is uninterrupted over 120 km (75 mi).

A large part of the coastline is a marshy jungle, the Sundarbans. They are the largest mangrove forest in the world. 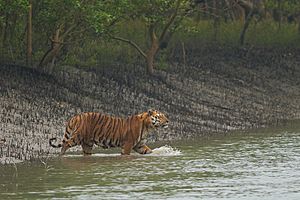 A Bengal tiger, the national animal, in the Sundarbans

The country is dominated by lush vegetation, with villages often buried in groves of mango, jackfruit, bamboo, betel nut, coconut and date palm. The country has up to 6000 species of plant life, including 5000 flowering plants. Water bodies and wetland systems provide a habitat for many aquatic plants. Water lilies and lotuses grow vividly during the monsoon season. The country has 50 wildlife sanctuaries.

Bangladesh is home to much of the Sundarbans, the world's largest mangrove forest, covering an area of 6,000 km2 in the southwest littoral region. It is divided into three protected sanctuaries–the South, East and West zones. The forest is a UNESCO World Heritage Site. The northeastern Sylhet region is home to haor wetlands, which is a unique ecosystem. It also includes tropical and subtropical coniferous forests, a freshwater swamp forest and mixed deciduous forests. The southeastern Chittagong region covers evergreen and semi evergreen hilly jungles. Central Bangladesh includes the plainland Sal forest running along the districts of Gazipur, Tangail and Mymensingh. St. Martin's Island is the only coral reef in the country.

Bangladesh has an abundance of wildlife in its forests, marshes, woodlands and hills. The vast majority of animals dwell within a habitat of 150,000 km2. The Bengal tiger, clouded leopard, saltwater crocodile, black panther and fishing cat are among the chief predators in the Sundarbans. Northern and eastern Bangladesh is home to the Asian elephant, hoolock gibbon, Asian black bear and oriental pied hornbill. 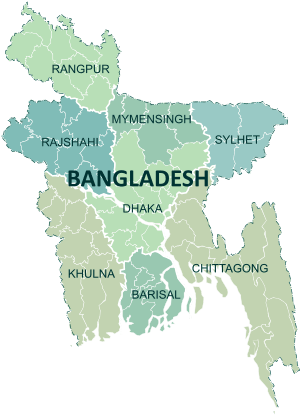 Divisions are divided into districts. There are 64 districts in Bangladesh.

Dhaka is the capital and largest city of Bangladesh. Other major cities include Chittagong, Khulna, Rajshahi, Sylhet, Barisal, Bogra, Comilla, Mymensingh and Rangpur. For more locations see List of settlements in Bangladesh.

The main religion in Bangladesh is Islam (85%). Many people also follow Hinduism (14%). Most Muslims are Sunni. Islam was made the state religion in the 1980s. Christians make up less than 1% of the population.

The earliest literary text in Bengali is the 8th century Charyapada. Medieval Bengali literature was often either religious or from other languages. The 19th century had poets such as Rabindranath Tagore, Michael Madhusudan Dutt and Kazi Nazrul Islam.

The musical tradition of Bangladesh is lyrics-based with little instruments. Folk music is often accompanied by the ektara, an instrument with only one string. Bangladeshi dance forms are from folk traditions.

Bangladesh makes about 80 films a year. Mainstream Hindi films are also quite popular. Around 200 daily newspapers are published in Bangladesh, along with more than 500 magazines.

Rice and fish are traditional favourite foods. Biryani is a favourite dish of Bangladeshis.

The sari is by far the most widely worn dress by Bangladeshi women.The salwar kameez (shaloar kamiz) is also quite popular among espcially the younger females, and In urban areas some women wear western attire. Among men, western attire is more widely worn.

Eid ul-Fitr and Eid ul-Adha have major festivals. Buddha Purnima, which marks the birth of Gautama Buddha, and Christmas, called Bôŗodin (Great day), are both national holidays. The most important non-religious festival is Pohela Boishakh or Bengali New Year, the beginning of the Bengali calendar.

All content from Kiddle encyclopedia articles (including the article images and facts) can be freely used under Attribution-ShareAlike license, unless stated otherwise. Cite this article:
Bangladesh Facts for Kids. Kiddle Encyclopedia.