Austria (German: Österreich; officially called Republic of Austria), is a country in Central Europe. Around Austria there are Germany, Czech Republic, Slovakia, Hungary, Slovenia, Italy, Switzerland, and Liechtenstein. Currently, the chancellor is Christian Kern. The previous chancellor was Werner Faymann (2008 - 2016). Austria has been a member-state of the EU since 1995.

The people in Austria speak German, a few also Hungarian, Slovenian and Croatian. The capital of Austria is Vienna (Wien).

Austria is more than a thousand years old. Its history can be followed to the ninth century. At that time the first people moved to the land now known as Austria. The name "Ostarrichi" is first written in an official document from 996. Since then this word has developed into the Modern German word Österreich, which literally means "East Kingdom."

Austria is a democratic state and has nine federal states (German: 'Bundesländer'): Vorarlberg, the Tyrol, Salzburg, Carinthia, Styria, Upper Austria, Lower Austria, Vienna and Burgenland. It is a neutral state, that means it does not take part in wars with other countries. Austria has been in the United Nations since 1955 and in the European Union since 1995.

There has been human settlement in the area that is now Austria for a long time. The first settlers go back to the Paleolithic age. That was the time of the Neanderthals. They left works of art such as the Venus of Willendorf. In the Neolithic age people were living there to dig for mineral resources, especially copper. Ötzi, a mummy found in a glacier between Austria and Italy, is from that time. In the Bronze Age people built bigger settlements and fortresses, especially where there were mineral resources. Salt mining began near Hallstatt. At that time, Celts began to form the first states. 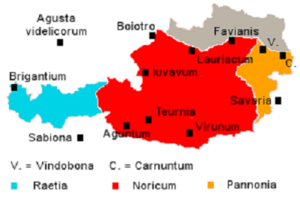 The Roman cities and their modern names

The Romans came 15 B.C. to Austria and made the Celtic Regnum Noricum to a province. Modern Austria was part of three provinces, Raetia, Noricum and Pannonia. The border in the north was the Danube.

Shown on the map

Austria is a largely mountainous country due to its location in the Alps. The Central Eastern Alps, Northern Limestone Alps and Southern Limestone Alps are all partly in Austria. Of the total area of Austria (84,000 km2 or 32,433 sq mi), only about a quarter can be considered low lying, and only 32% of the country is below 500 metres (1,640 ft). The Alps of western Austria give way somewhat into low lands and plains in the eastern part of the country.

It can be divided into five areas, the biggest being the Eastern Alps, which constitute 62% of the nation's total area. The Austrian foothills at the base of the Alps and the Carpathians account for around 12% and the foothills in the east and areas surrounding the periphery of the Pannoni low country amount to about 12% of the total landmass. The second greater mountain area (much lower than the Alps) is situated in the north. Known as the Austrian granite plateau, it is located in the central area of the Bohemian Mass and accounts for 10% of Austria. The Austrian portion of the Vienna basin comprises the remaining 4%. 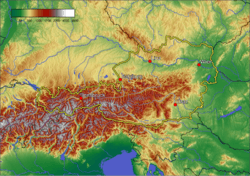 A topographic map of Austria showing cities with over 100,000 inhabitants.

The six highest mountains in Austria are:

The greater part of Austria lies in the cool/temperate climate zone, where humid westerly winds predominate. With nearly three-quarters of the country dominated by the Alps, the alpine climate is predominant. In the east—in the Pannonian Plain and along the Danube valley—the climate shows continental features with less rain than the alpine areas. Although Austria is cold in the winter (−10 to 0 °C), summer temperatures can be relatively high, with average temperatures in the mid-20s and a highest temperature of 40.5 °C (105 °F) in August 2013. 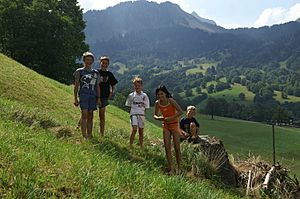 Children in Austria, near Au, Vorarlberg

Austria's population was estimated to be 8.72 million in April 2016 by the Statistik Austria. The population of the capital, Vienna, exceeds 1.8 million (2.6 million, including the suburbs), representing about a quarter of the country's population. It is known for its cultural offerings and high standard of living.

185,592 Turks (including a minority of Turkish Kurds) make up the second biggest single ethnic minority in Austria after Germans (2.5%), representing 2.2% of the total population. 13,000 Turks were naturalised in 2003 and an unknown number have arrived in Austria at the same time. While 2,000 Turks left Austria in the same year, 10,000 immigrated to the country, confirming a strong trend of growth. Together, Serbs, Croats, Bosniaks and Slovenes make up about 5.1% of Austria's total population.

Austria has many artists, there are Gustav Klimt, Oskar Kokoschka, Egon Schiele or Friedensreich Hundertwasser, Inge Morath or Otto Wagner and scienc.

Austria's cuisine is derived from that of the Austro-Hungarian Empire. Austrian cuisine is mainly the tradition of Royal-Cuisine ("Hofküche") delivered over centuries. It is famous for its well-balanced variations of beef and pork and countless variations of vegetables. There is also the "Mehlspeisen" Bakery, which created particular delicacies such as Sachertorte, "Krapfen" which are doughnuts usually filled with apricot jam or custard, and "Strudel" such as "Apfelstrudel" filled with apple, "Topfenstrudel" filled with a type of cheese curd called "topfen", and "Millirahmstrudel" (milk-cream strudel).

In addition to native regional traditions, the cuisine has been influenced by Hungarian, Bohemia Czech, Jewish, Italian, Balkan and French cuisine, from which both dishes and methods of food preparation have often been borrowed. The Austrian cuisine is therefore one of the most multicultural and transcultural in Europe. 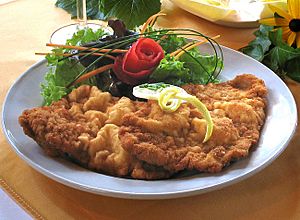 Typical Austrian dishes include Wiener Schnitzel, Schweinsbraten, Kaiserschmarren, Knödel, Sachertorte and Tafelspitz. There are also Kärntner Kasnudeln, which are pockets of dough filled with Topfen, potatoes, herbs and peppermint which are boiled and served with a butter sauce. Kasnudeln are traditionally served with a salad. Eierschwammerl dishes are also popular. The sugar block dispenser Pez was invented in Austria, as well as Mannerschnitten. Austria is also famous for its Mozartkugeln and its coffee tradition.

Beer is sold in 0.2 litre (a Pfiff), 0.3 litre (a Seidel, kleines Bier or Glas Bier) and 0.5 litre (a Krügerl or großes Bier or Halbe) measures. At festivals one litre Maß and two litre Doppelmaß in the Bavarian style are also dispensed. The most popular types of beer are lager (known as Märzen in Austria), naturally cloudy Zwicklbier and wheat beer. At holidays like Christmas and Easter bock beer is also available.

The most important wine-producing areas are in Lower Austria, Burgenland, Styria and Vienna. The Grüner Veltliner grape provides some of Austria's most notable white wines and Zweigelt is the most widely planted red wine grape.

In Upper Austria, Lower Austria, Styria and Carinthia, Most, a type of cider or perry is widely produced.

Schnapps of typically up to 60% alcohol or fruit brandy is drunk, which in Austria is made from a variety of fruits, for example apricots and rowanberries. The produce of small private schnapps distilleries, of which there are around 20,000 in Austria, is known as Selbstgebrannter or Hausbrand.

Local soft drinks such as Almdudler are very popular around the country as an alternative to alcoholic beverages. Another popular drink is the so-called "Spetzi", a mix between Coca-Cola and the original formula of Orange Fanta or the more locally renowned Frucade. Red Bull, the highest-selling energy drink in the world, was invented in Austria.

All content from Kiddle encyclopedia articles (including the article images and facts) can be freely used under Attribution-ShareAlike license, unless stated otherwise. Cite this article:
Austria Facts for Kids. Kiddle Encyclopedia.