The Soviet Union was created after Vladimir Lenin led the overthrow of Alexander Kerensky. The communist government developed industry and over time became a major, powerful union. The largest country in the Union was Russia, and Kazakhstan was the second. The capital city of the Soviet Union was Moscow. Although technically countries could become independent if they wanted, in practice it was a completely centralized government, with no states' rights for the member countries. Many believe that the Soviet Union was the final stage of the Russian Empire; since the USSR covered most of the land of the former Empire.

The Union was formed with the professed idea to give everyone equal social and economic rights. There was virtually no personal property - everything belonged to the state. "Soviets", or workers' councils were created to speak for the workers, and served as an elite group to govern them. It was successful in many fields; putting the first man and satellite into space and winning World War II alongside the United States and United Kingdom. However, its centralized government found innovation and change difficult to handle. The union collapsed in 1991, partly due to the efforts at reform by its leader, Mikhail Gorbachev.

As of 2016, the document that confirmed the dissolution of the Soviet Union is missing.

Republics of the Soviet Union

The Federal Republics were different in that they had more autonomy, and were made up of states themselves. These were often called Autonomous Soviet Socialist Republics. There were a number of them. Most of them still exist; though they are now republics, within the independent state. The Tatar ASSR turned into the Republic of Tatarstan, for example (It is located around Kazan). 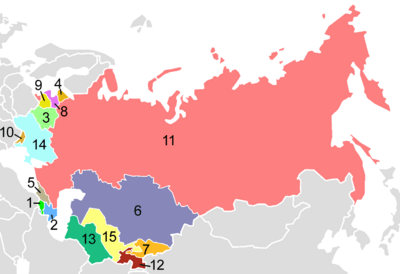 The Soviet Union, before it collapsed

The Soviet Union at its largest size in 1991, with 22,400,000 square kilometres (8,600,000 sq mi), was the world's biggest country. Covering a sixth of the world's lived in land, its size was comparable to North America's. The western part (in Europe) accounted for a quarter of the country's area, and was the country's cultural and economic center. The eastern part (in Asia) extended to the Pacific Ocean to the east and Afghanistan to the south, and was much less lived in than the western part. It was over 10,000 kilometres (6,200 mi) across (11 time zones) and almost 7,200 kilometres (4,500 mi) north to south. Its five climatic (different weather, temperature, humidity and atmospheric pressure) zones were tundra, taiga, steppes, desert, and mountains.

The Soviet Union had the world's longest border, measuring over 60,000 kilometres (37,000 mi) in 1991. Two thirds of the Soviet border was coastline of the Arctic Ocean. Across the Bering Strait was the United States. The Soviet Union bordered Afghanistan, China, Czechoslovakia, Finland, Hungary, Iran, Mongolia, North Korea, Norway, Poland, Romania, and Turkey at the end of WWII.

The last Russian Tsar (translated Caesar, which means emperor), Nicholas II, ruled Russia until March 1917, when the Russian Empire was taken over and a short-lived "provisional government" replaced it, led by Alexander Kerensky and soon to be overthrown in November by Bolsheviks.

From 1917 to 1922, the country that came before the Soviet Union was the Russian Soviet Federative Socialist Republic (RSFSR), which was its own country, as were other Soviet republics at the time. The Soviet Union was officially created in December 1922 as the union of the Russian (also known as Bolshevist Russia), Ukrainian, Belarusian, and Transcaucasian Soviet republics ruled by the communist Bolshevik parties.

Revolution and the foundation of a workers nation

Extreme government-changing activity in the Russian Empire began with the Decembrist Revolt of 1825, and although serfdom was removed in 1861, its removal was achieved on terms unfavorable to the peasants (poor agricultural workers) and served to encourage changers (revolutionaries). A parliament (legislative assembly)—the State Duma—was created in 1906 after the Russian Revolution of 1905, but the Tsar protested people trying to move from absolute to constitutional monarchy. Rebellion continued and was aggravated during World War I by failure and food shortages in popular cities.

Vladimir Lenin talking to a crowd in 1920.

A rebellion in Saint Petersburg, in response to the wartime decay of Russia's economy and morale, caused the "February Revolution" and the removal of the government in March 1917. The tsarist autocracy was replaced by the Russian "Provisional government", whose leaders intended to have elections to Russian Constituent Assembly and to continue war on the side of the Entente in World War I.

At the same time, workers' councils, known as Soviets, sprang up across the country. The Bolsheviks, led by Vladimir Lenin, pushed for socialist revolution in the Soviets and on the streets. In November 1917, during the "October Revolution", they took power from the Provisional Government. In December, the Bolsheviks signed an armistice (peace) with the Central Powers. In March, after more fighting, the Soviets quit the war for good and signed the Treaty of Brest-Litovsk.

In the long and bloody Russian Civil War the new Soviet power won. The civil war between the Reds and the Whites started in 1917 and ended in 1923. It included the Siberian Intervention and other foreign interference, the killing of Nicholas II and his family and the famine in 1921, which killed about 5 million. In March 1921, during a related conflict with Poland, the Peace of Riga was signed and split disputed territories in Belarus and Ukraine between the Republic of Poland and Soviet Russia. The Soviet Union had to resolve similar conflicts with the newly established Republic of Finland, the Republic of Estonia, the Republic of Latvia, and the Republic of Lithuania which had all escaped the empire during the civil war.

Unification of the Soviet Republics

On 1 February 1924, the USSR was accepted as a country by the British Empire. Also in 1924, a Soviet Constitution (set of laws) was approved, making true the December 1922 union of the Russian SFSR, the Ukrainian SSR, the Belarusian SSR, and the Transcaucasian SFSR to form the "Union of Soviet Socialist Republics" (USSR).

The big changes of the economy, industry and politics of the country began in the early days of Soviet power in 1917. A large part of this was performed according to Bolshevik Initial Decrees, documents of the Soviet government, signed by Vladimir Lenin. One of the most important and notable breakthroughs was the GOELRO plan, that planned a major change of the Soviet economy based on total electrification of the country. The Plan was developed in 1920 and covered a 10- to 15-year period. It included the making of a network of 30 regional power stations, including ten large hydroelectric power plants, and numerous electric-powered large industrial organizations. The Plan became the prototype for subsequent Five-Year Plans and was basically fulfilled by 1931. 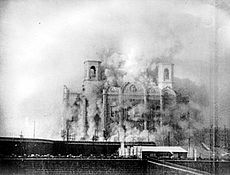 Cathedral of Christ the Saviour in Moscow being demolished in 1931. Organized religion was suppressed in the Soviet Union.

From its beginning years, government in the Soviet Union was ruled as a one-party state by the Communist Party (Bolsheviks). After the economic policy of War Communism during the Civil War, the Soviet government permitted some private enterprise to coexist with nationalized industry in the 1920s and total food requisition in the countryside was replaced by a food tax (see New Economic Policy).

Soviet leaders argued that one-party rule was necessary because it ensured that 'capitalist exploitation' would not return to the Soviet Union and that the principles of Democratic Centralism would represent the people's will. Debate over the future of the economy provided the background for Soviet leaders to take more power in the years after Lenin's death in 1924. Initially, Lenin was to be replaced by a "troika" composed of Grigory Zinoviev of Ukraine, Lev Kamenev of Moscow, and Joseph Stalin of Georgia.

Stalin led the country through World War II and into the Cold War. Gulag camps greatly expanded to take millions of prisoners. After he died, Georgy Malenkov, one of the few top officials he didn't kill, continued his policies. Nikita Khrushchev reversed some of Stalin's policies but Leonid Brezhnev and Alexei Kosygin kept things as they were.

After the 1936 revised constitution, the Soviet Union stopped acting as a union of republics and more as a single super-country.

Leonid Brezhnev led the Soviet Union from 1964 until his death in 1982. He came to power after he convinced the government to overthrow Nikita Krushchev. Brezhnev's rule is often linked with the decline in Soviet economy and starting the chain of events that would lead to the union's eventual collapse. He was awarded Hero of the Soviet Union (The highest honour) on three separate occasions. Brezhnev was succeeded by Yuri Andropov, who died a few years later. Andropov was succeeded by the frail and aging Konstantin Chernenko. Chernenko died a year after taking office.

Brezhnev was the second longest serving Soviet leader after Stalin. The Following is a list of leaders (General Secretary of the Communist Party) in order of their tenure and length of leadership: 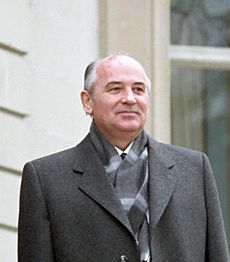 Mikhail Gorbachev was the Soviet Union's last leader. He was the only Soviet leader to have been born after the October revolution and was thus a product of the Soviet Union having grown up in it. He and US president Ronald Reagan signed a treaty to get rid of some nuclear weapons. Gorbachev started social and economic reforms that gave people freedom of speech; which allowed them to criticise the government and its policies. The ruling communist party lost its grip on the media and the people. Newspapers began printing the many failures that the Soviet Union had covered up and denied in its past. The Soviet Union's economy was lagging and the government was spending a lot of money on competing with the west.

By the 1980s the Soviet economy was suffering but it was stable. Gorbachev's new ideas had got out of hand and the communist party lost control. Boris Yeltsin was elected (democratically) the President of the Russian SFSR even though Gorbachev did not want him to come into power. Lithuania announced its independence from the Union and the Soviet government demanded it surrender its independence or it would send the Red Army to keep order. Gorbachev came up with the idea to keep the Soviet Union together with each republic would be more independent but under the same leader. He wanted to call it the 'Union of Soviet Sovereign Republics' to keep the USSR/Soviet Union title and the CCCP in Russian.

A group of serious communists (unhappy with Gorbachev's idea) tried to take over Moscow and stop the Soviet Union from collapsing. It only made people want independence more. Although he survived the attempted takeover, he lost all of his power outside of Moscow. Russia declared independence in December 1991. Later in the month, leaders of Russia, Byelorussia and Ukraine signed a treaty called the Belavezha Agreement to dissolve the USSR; extremely angering Gorbachev. He had no choice but to accept the treaty and resigned on Christmas day 1991. The Soviet Unions parliament (Supreme Soviet) made the Belavezha Agreement law marking formally the dissolution of the Soviet Union. The next day the Soviet flag was lowered from the Kremlin for the last time.

All content from Kiddle encyclopedia articles (including the article images and facts) can be freely used under Attribution-ShareAlike license, unless stated otherwise. Cite this article:
Soviet Union Facts for Kids. Kiddle Encyclopedia.