Timeline of the far future facts for kids 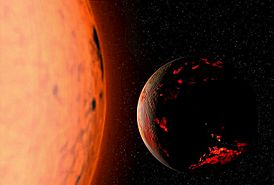 Artist's idea of the Earth several billion years from now, when the Sun is a red giant.

Some types of science can say what could happen many, many years from now. For example, astrophysics can say how planets and stars form, affect each other, and die; particle physics can say how atoms and other matter act over time; evolutionary biology can allow us to see how living things change over time; and plate tectonics can say how continents shift over time. By observing the past and present, astrophysicists, particle physicists, evolutionary biologists and geologists can make good guesses about what might happen in the future. We call these guesses predictions.

The second law of thermodynamics is important to predictions about the future of Earth, the Solar System, and the universe. The second law of thermodynamics says that entropy is always happening. That means that the universe is slowly running out of the kind of energy that can do work. For example, stars will eventually run out of hydrogen fuel and burn out.

Physicists believe that most matter, which is anything that has mass and takes up space, will eventually break apart because of radioactive decay. Even the most stable molecules and atoms will break into subatomic particles. Scientists do believe the universe is flat (or almost flat), so it will not collapse in on itself after a finite time. But if there really is an infinite amount of time, then even very unlikely events might happen, such as the formation of Boltzmann brains.

This article shows timelines from the beginning of the 4th millennium (3001 CE) into the far, far future. It discusses whether humans will become extinct, whether protons decay, and whether the Earth will still exist when the Sun expands to become a red giant.

Earth, the Solar System and the universe

Erosion is when wind, water or other things make a rock or mountain shrink by breaking of tiny pieces of it off over time.

See also: Formation and evolution of the Solar System

As of 2020, five machines that travel through outer space are moving toward the edge of the solar system: Voyager 1, Voyager 2, Pioneer 10, Pioneer 11 and New Horizons. They will travel into interstellar space. So long as they do not crash into anything, these machines should persist indefinitely.

For graphical, logarithmic timelines of these events see:

All content from Kiddle encyclopedia articles (including the article images and facts) can be freely used under Attribution-ShareAlike license, unless stated otherwise. Cite this article:
Timeline of the far future Facts for Kids. Kiddle Encyclopedia.