Lisbon is the capital city of Portugal. It is the largest city of Portugal. The city has a population of about two million people. Lisbon is 11th most populous urban area in the European Union. Lisbon is on the River Tagus. It has a pleasant climate and has about 220 days of sunshine each year. There are many beautiful beaches close to the city. There are also many seafood restaurants, historical sites and monuments. Lisbon is one of the oldest cities in the world. 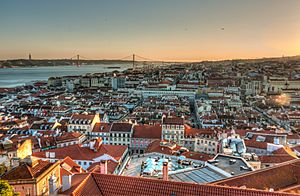 Partial view of Lisbon, looking towards the Tagus River.

The westernmost part of Lisbon is occupied by the Parque Florestal de Monsanto (English: Monsanto Forest Park), a 10 km2 (4 sq mi) urban park, one of the largest in Europe, and occupying ten percent of the municipality.

The city occupies an area of 100.05 km2 (39 sq mi), and its city boundaries, unlike those of most major cities, coincide with those of the municipality. The rest of the urbanised area of the Lisbon Metropolitan Area, known generically as Greater Lisbon (Portuguese: Grande Lisboa), extends to the city of Setúbal and includes several administratively defined cities and municipalities, such as Amadora, Queluz, Agualva-Cacém, Odivelas, Loures, Sacavém, Almada, Barreiro, Seixal and Oeiras 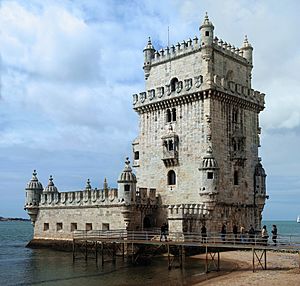 The Belém Tower, one of the most famous and visited landmarks in Lisbon and throughout Portugal.

The city of Lisbon is rich in architecture; Romanesque, Gothic, Manueline, Baroque, Modern and Postmodern constructions can be found all over Lisbon. The city is also crossed by historical boulevards and monuments along the main thoroughfares, particularly in the upper districts; notable among these are the Avenida da Liberdade (Avenue of Liberty), Avenida Fontes Pereira de Melo, Avenida Almirante Reis and Avenida da República (Avenue of the Republic). 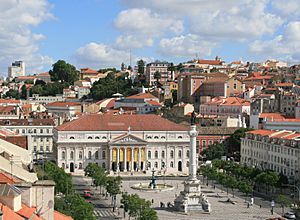 D. Maria II National Theatre, located in the Rossio Square, is one of Portugal's most prestigious venues.

The monument to Christ the King (Cristo-Rei) stands on the southern bank of the Tagus River, in Almada. With open arms, overlooking the whole city, it resembles the Corcovado monument in Rio de Janeiro, and was built after World War II, as a memorial of thanksgiving for Portugal's being spared the horrors and destruction of the war.

13 June is Lisbon´s holiday in honour of the city's saint, Anthony of Lisbon (Portuguese: Santo António). Saint Anthony, also known as Saint Anthony of Padua, was a wealthy Portuguese bohemian who was canonised and made Doctor of the Church after a life preaching to the poor. Although Lisbon’s patron saint is Saint Vincent of Saragossa, whose remains are housed in the Sé Cathedral, there are no festivities associated with this saint. 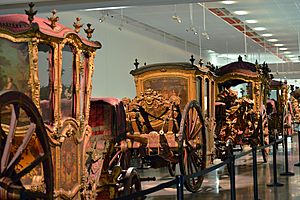 The National Coach Museum has the largest collection of royal carriages in the world and is one of Lisbon's most visited institutions.

Eduardo VII Park, the second largest park in the city following the Parque Florestal de Monsanto (Monsanto Forest Park), extends down the main avenue (Avenida da Liberdade), with many flowering plants and greenspaces, that includes the permanent collection of subtropical and tropical plants in the winter garden (Portuguese: Estufa Fria). Originally named Parque da Liberdade, it was renamed in honour of Edward VII of England who visited Lisbon in 1903.

Lisbon has two sites listed by UNESCO as a World Heritage Site: Belém Tower and Jerónimos Monastery. Furthermore, in 1994, Lisbon was the European Capital of Culture and in 1998 organised the Expo '98 (1998 Lisbon World Exposition).

Lisbon is also home to the Lisbon Architecture Triennial, the Moda Lisboa (Fashion Lisbon), ExperimentaDesign – Biennial of Design and LuzBoa – Biennial of Light.

In addition, the mosaic Portuguese pavement (Calçada Portuguesa) was born in Lisbon, in the mid-1800s. The art has since spread to the rest of the Portuguese Speaking world. The city remains one of the most expansive examples of the technique, nearly all walkways and even many streets being created and maintained in this style.

In terms of Portuguese cities, Lisbon was considered the most livable in a survey of living conditions published yearly by Expresso.

In May 2018, the city hosted the 63rd edition of the Eurovision Song Contest, after the victory of Salvador Sobral with the song "Amar pelos dois" in Kiyv on May 13, 2017. 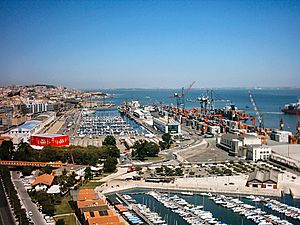 The Port of Lisbon, one of the busiest in Europe.

The Lisbon region is the wealthiest region in Portugal and it is well above the European Union's GDP per capita average – it produces 45% of the Portuguese GDP. Lisbon's economy is based primarily on the tertiary sector. Most of the headquarters of multinationals operating in Portugal are concentrated in the Grande Lisboa Subregion, specially in the Oeiras municipality. The Lisbon Metropolitan Area is heavily industrialized, especially the south bank of the Tagus river (Rio Tejo).

The country's chief seaport, featuring one of the largest and most sophisticated regional markets on the Iberian Peninsula, Lisbon and its heavily populated surroundings are also developing as an important financial centre and a dynamic technological hub. Automobile manufacturers have erected factories in the suburbs, for example, AutoEuropa.

Lisbon has the largest and most developed mass media sector of Portugal, and is home to several related companies ranging from leading television networks and radio stations to major newspapers. 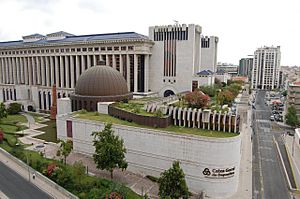 The Euronext Lisbon stock exchange, part of the pan-European Euronext system together with the stock exchanges of Amsterdam, Brussels and Paris, is tied with the New York Stock Exchange since 2007, forming the multinational NYSE Euronext group of stock exchanges.

Lisbonite industry has very large sectors in oil, as refineries are found just across the Tagus, textile mills, shipyards and fishing. 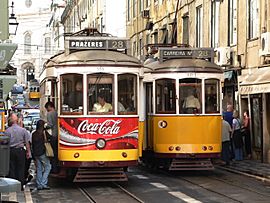 The Lisbon Metro connects the city centre with the upper and eastern districts and also reaches some suburbs that are part of the Lisbon Metropolitan Area, such as Amadora and Loures. It is the fastest way to get around the city and it provides a good number of interchanging stations with other types of transportation. From the Lisbon Airport station to the city centre it may take roughly 25 mins. As of 2018, the Lisbon Metro comprises four lines, identified by individual colours (blue, yellow, green and red) and 56 stations, with a total length of 44.2 km. Several expansion projects have been proposed, being the most recent the transformation of the Green Line into a circular line and the creation of two more stations (Santos and Estrela).

A traditional form of public transport in Lisbon is the tram. Introduced in the 19th century, the trams were originally imported from the USA, and called the americanos. The earliest trams can still be seen in the Museu da Carris (the Public Transport Museum). Other than on the modern Line 15, the Lisbon tramway system still employs small (four wheel) vehicles of a design dating from the early twentieth century. These distinctive yellow trams are one of the tourist icons of modern Lisbon, and their size is well suited to the steep hills and narrow streets of the central city. 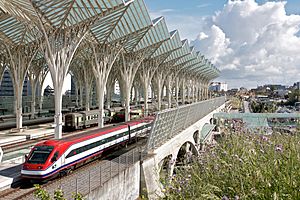 Gare do Oriente train station is an intermodal station that links the Lisbon metro with the city's Carris buses as well as outstation bus and train lines.

There are four commuter train lines departing from Lisbon: the Cascais, Sintra and Azambuja lines (operated by CP – Comboios de Portugal), as well as a fourth line to Setúbal (operated by Fertagus) crossing the Tagus river, over the 25 de Abril Bridge. The major railway stations are Santa Apolónia, Rossio, Gare do Oriente, Entrecampos, and Cais do Sodré.

Local bus service within Lisbon is operated by Carris.

There are other commuter bus services from the city (connecting cities outside Lisbon, and connecting these cities to Lisbon): Vimeca, Rodoviária de Lisboa, Transportes Sul do Tejo, Boa Viagem, Barraqueiro are the main ones, operating from different terminals in the city.

Lisbon is connected to its suburbs as well as throughout Portugal by an extensive motorway network. There are three circular motorways around the city; the 2ª Circular, the IC17 (CRIL), and the A9 (CREL). 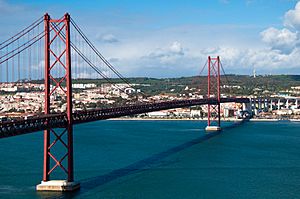 The city is connected to the far side of the Tagus by two important bridges:

The foundations for a third bridge across the Tagus have already been laid, but the overall project has been postponed due to the economic crisis in Portugal and all of Europe.

Another way of crossing the river is by taking the ferry. The company is Transtejo & Soflusa, which operates from different points in the city to Cacilhas, Seixal, Montijo, Porto Brandão and Trafaria under the brand Transtejo and to Barreiro under the brand Soflusa.

Humberto Delgado Airport is located within the city limits. It is the headquarters and hub for TAP Portugal as well as a hub for Easyjet, Azores Airlines, Ryanair, EuroAtlantic Airways, White Airways, and Hi Fly. A second airport has been proposed, but the project has been put on hold because of the Portuguese and European economic crisis, and also because of the long discussion on whether a new airport is needed. However, the last proposal is military air base in Montijo that would be replaced by a civil airport. So, Lisbon would have two airports, the current airport in north and a new in the south of the city.

All content from Kiddle encyclopedia articles (including the article images and facts) can be freely used under Attribution-ShareAlike license, unless stated otherwise. Cite this article:
Lisbon Facts for Kids. Kiddle Encyclopedia.