List of World Heritage Sites in Italy facts for kids 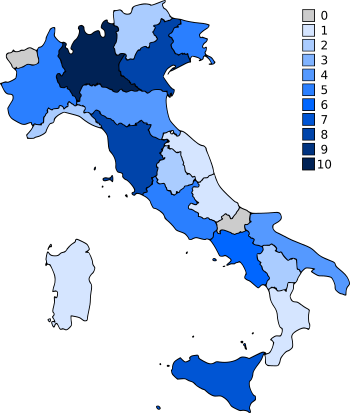 The United Nations Educational, Scientific and Cultural Organization (UNESCO) World Heritage Sites are places of importance to cultural or natural heritage as described in the UNESCO World Heritage Convention, established in 1972. Italy ratified the convention on June 23, 1978, making its historical sites eligible for inclusion on the list. As of 2017, Italy has a total of 53 inscribed properties, making it the state party with the most World Heritage Sites.

Out of Italy's 53 heritage sites, five are shared with other countries: "Monte San Giorgio" and "Rhaetian Railway in the Albula / Bernina Landscapes" with Switzerland; "Historic Centre of Rome" with the Vatican; "Prehistoric pile dwellings around the Alps" with Austria, France, Germany, Slovenia and Switzerland; and "Venetian Works of Defence between 15th and 17th centuries: Stato da Terra – western Stato da Mar with Croatia and Montenegro. Four World Heritage Sites in Italy are of the natural type, all others are cultural sites (47). Therefore, Italy has the largest number of world "cultural" heritage sites followed by Spain with 39 cultural sites.

The table lists information about each World Heritage Site:

Name: as listed by the World Heritage Committee
Location: city and region of site
Area: size of property and buffer zone
UNESCO data: the site's reference number; the year the site was inscribed on the World Heritage List; the criteria it was listed under: criteria i through vi are cultural, while vii through x are natural; (the column sorts by year added to the list)
Description: brief description of the site
The exhibition: A multi-sensory itinerary through the rich cultural and artistic heritage of the country, which recreates the atmosphere of some of the most fascinating places, recognized as a World Heritage Site.

As of 2016, Italy was recording forty such sites on its tentative list. These sites, along with the year they were first included in the tentative list are:

All content from Kiddle encyclopedia articles (including the article images and facts) can be freely used under Attribution-ShareAlike license, unless stated otherwise. Cite this article:
List of World Heritage Sites in Italy Facts for Kids. Kiddle Encyclopedia.