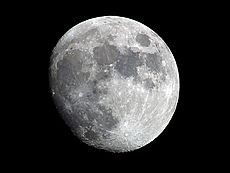 A natural satellite in astronomy is a smaller body which moves around a larger body. The smaller body is held in orbit by gravitation. The term is used for moons which go around planets, and it is also used for small galaxies which orbit larger galaxies.

Bodies which orbit planets are called moons. They vary in size. The Earth has only one moon. Some other planets have many moons, and some have none. When people write just "the moon", they are usually talking about the moon of the Earth. Earth's moon is written with a capital letter, Moon. The Latin word for the moon is luna, which is why the adjective used to talk about the moon is "lunar". For example, lunar eclipse.

Anything that goes around a planet is called a satellite. Moons are natural satellites. People also use rockets to send machines into orbit around the Earth. These machines are called artificial (man-made) satellites.

Moons do not make their own light. We can see the Earth's moon because it acts like a mirror, and reflects the light of the Sun. The same half of the moon faces toward Earth at all times, no matter where it moves. But different parts of the moon are lit up by the Sun, so it looks different at different times of the month. This change as seen from Earth is called the phases of the moon, or lunar phases.

The Apollo 11 mission helped Neil Armstrong and Buzz Aldrin become the first people to walk on the Moon. They did this on July 20, 1969.

The orbit of a moon or other satellite is affected by two forces: gravity, and the centripetal force. For example, the Earth's moon is kept in orbit by the gravitational pull from the Earth. This is also the way the Earth is attracted to the Sun, and stays in its orbit. The orbit of the Earth's moon actually causes the tides and waves on Earth. 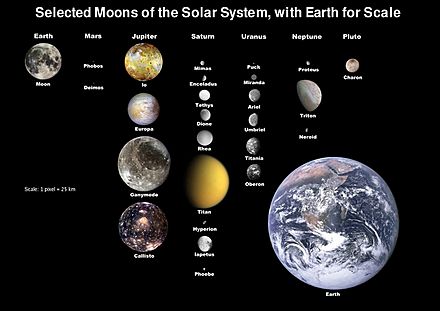 Selected moons, with the Earth to scale. Nineteen moons are large enough to be round, and one, Titan, has a substantial atmosphere. 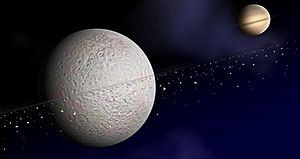 No moons that belong to moons have been found. In most cases, the tidal effects of the main body would make such as unstable.

However, math completed after the recent finding of a possible ring system around Saturn's moon Rhea show that Rhean orbits would be stable. Also, the rings are thought to be narrow, something that is known with shepherd moons.

The finding of 243 Ida's moon Dactyl in the early 1990s was the proof that some asteroids have moons; indeed, 87 Sylvia has two. Some, such as 90 Antiope, are double asteroids with two same-sized parts.

Moons of the Solar System

The biggest moons in the Solar System (those bigger than about 3000 km across) are Earth's moon, Jupiter's Galilean moons (Io, Europa, Ganymede, and Callisto), Saturn's moon Titan, and Neptune's captured moon Triton.

The following is a table grouping the moons of the solar system by diameter. The column on the right has some notable planets, dwarf planets, asteroids, and Trans-Neptunian Objects for comparing. It is normal for moons to be named after people from mythology.

Planets that have moons

Planets in our Solar System that have moon(s):

Dwarf planets that have moons

Planets not known to have moons

Planets in our Solar System that do not have moons:

Galaxies are found in groups called galaxy clusters which are also held together by gravitation. Our own Milky Way is the second largest galaxy in our Local Group (the largest is Andromeda). Many smaller galaxies and star clusters are also held in the Local Group, outside the two main galaxies. They are all in orbits round one of the centres of gravity. That means most of them move round either Andromeda or the Milky Way. so it seems natural for astronomers to use the term 'satellite' for these as well.

Our Local Group is itself part of an even larger group, the Virgo Supercluster. There are other, even larger, groups of galaxies: see the Great Wall for an example.

All content from Kiddle encyclopedia articles (including the article images and facts) can be freely used under Attribution-ShareAlike license, unless stated otherwise. Cite this article:
Natural satellite Facts for Kids. Kiddle Encyclopedia.