Hong Kong has full autonomy in the conduct of its external commercial relations. The Basic Law of the Hong Kong provides that it shall be a separate customs territory and may, using the name 'Hong Kong, China', participate in relevant international organisations and international trade agreements, such as the World Trade Organization.

The HKETOs concentrate most of their work on promoting Hong Kong's economic and trade interests. The major function of HKETOs include:

In countries or territories where no HKETO is present, diplomatic missions of China have the duty to represent Hong Kong's interests. Visa applications at these missions are, nevertheless, sent to and processed by the Immigration Department of Hong Kong.

At present, all eleven overseas HKETOs have been granted certain privileges and immunities by respective host governments to facilitate the HKETOs to discharge their duties without intervention. Broadly speaking, the privileges and immunities enjoyed by the HKETOs mainly include the inviolability of premises, official correspondence, archives and documents as well as the exemption of premises and representatives from taxation.

HKETO Berlin is the only regional representative office in Germany that has a quasi-diplomatic status.

Outside the Greater China Region 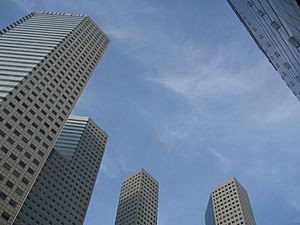 HKETO in Singapore, on the 34th floor of the office building at Suntec City Tower 2. 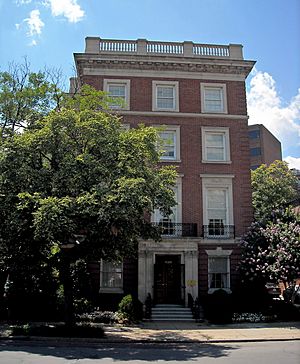 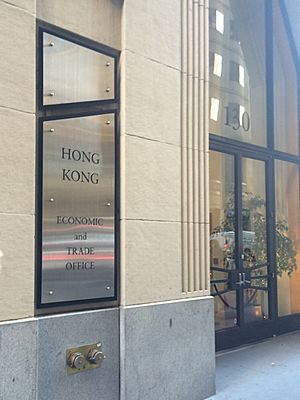 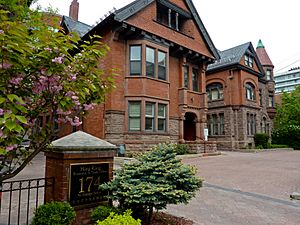 HKETO Brussels is the second among all HKETOs, marking its 50th anniversary in 2015.

In preparation for the handover, the British and Chinese governments agreed that these offices should be renamed "Hong Kong Economic and Trade Offices", to make clear that they did not have diplomatic or consular functions. In the United Kingdom, the Hong Kong Economic and Trade Office Act 1996 conferred a number of personal immunity and tax privileges on the HKETO in London.

All content from Kiddle encyclopedia articles (including the article images and facts) can be freely used under Attribution-ShareAlike license, unless stated otherwise. Cite this article:
Hong Kong Economic and Trade Office Facts for Kids. Kiddle Encyclopedia.