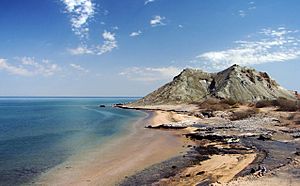 Iran (Persian: ايران), once known as Persia, is a country in Western Asia. It is part of the Middle East region. It shares borders with Afghanistan, Armenia, Azerbaijan, Iraq, Pakistan, Turkey, and Turkmenistan.

Tehran is the capital and biggest city. Iran is the eighteenth largest country in the world. It has more than 80 million people. Iran has been a member of the United Nations since 1945. It is a member of the Organization of the Petroleum Exporting Countries (OPEC). It is an Islamic republic.

In the past, Iran was called "Persia" by people outside of the country. The people that lived there called the country "Iran". The official name was Persia. The name Persia was used when dealing with other countries and in government papers.

In 1935, Reza Shāh Pahlavi was Shah of Iran. He officially renamed the country "Iran". This was done to show that Iran belongs to all the non-Persian Iranians as well as to Persian Iranians. The name Iran means land of the Aryans. It is used in the ancient book of the Zoroastrians, the Avesta. In the 19th and early 20th century, the name Aryan was used by Europeans to mean all Indo-Europeans. The "Aryan Race" was a term that Hitler used to describe his "Superior" or "perfect" race, but it first meant Iranians. "Aryan" means "noble" in Iranian languages.

Around 500 BC, the area that is now Iran was the center of the Achaemenid Empire. The Greek city states fought against the Persian armies led by Darius the Great and Xerxes. Then Alexander the Great took the country by fighting the Achaemenid dynasty of Persia. He later ruled.

After them, the Sassanian dynasty (224-651) parm over. Other people took Persia by fighting, like the Arabs (7th century), Turks (10th century) and Mongols (13th century). However, Iran has always had a different culture and continued to survive.

The Central Intelligence Agency (CIA) worked in Iran to create riots which led to the removal of Prime Minister Mosaddegh. The United States and Great Britain then made the Shah Mohammad Reza Pahlavi King of Iran, again. When the Shah left Iran, he had ruled for less than a year. The Iranian government was changed to an Islamic Republic by Islamic Revolution. Soon afterwards, the Iranian Students Movement (Tahkim Vahdat), with the backing of the new government, took over the U.S. Embassy in Tehran. They held most of the diplomats hostage for 444 days.

Iran defended itself against Iraqi invasion in 1980. That war that lasted eight years. Many Arab and Western countries, including the United States, provided weapons and technical support for Iraq's Saddam Hussein. Those weapons included biological and chemical weapons of mass destruction.

Some buildings in Tehran. 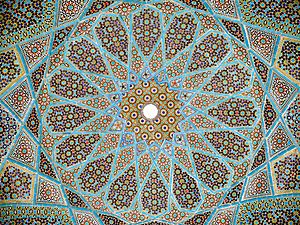