This is a list of the Kings and Queens of the Kingdom of England from 924 until England and Scotland joined together in 1707. 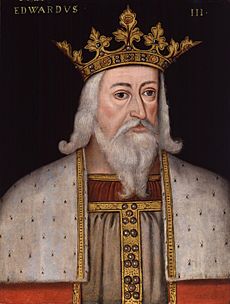 Edward III as he was portrayed in the late 16th century.

The Tudors were from Wales. In 1536, Wales became part of England. England had controlled Wales since 1284.

The Stuarts were also Kings of Scotland, with which kingdom England was in personal, but not Legal union until 1707.

There was a civil war in England from 1642 until 1652. In 1649, King Charles I was executed and England became a Commonwealth. In 1653 Oliver Cromwell made himself Lord Protector and so England became a protectorate. Cromwell died in 1658 and his son, Richard, became Lord Protector. In 1660 power was given back to the Monarchy.

All content from Kiddle encyclopedia articles (including the article images and facts) can be freely used under Attribution-ShareAlike license, unless stated otherwise. Cite this article:
List of English monarchs Facts for Kids. Kiddle Encyclopedia.