Miami-Dade County (formerly Dade County) is an American county located in the southeastern part of the U.S. state of Florida. It is the southeasternmost county on the U.S. mainland. According to a 2015 census report, the county had a population of 2,693,117, making it the most populous county in Florida and the seventh-most populous county in the United States. It is also Florida's third-largest county in terms of land area, with 1,946 square miles (5,040 km2). The county seat is Miami.

The county is home to 34 incorporated cities and many unincorporated areas. The northern, central and eastern portions of the county are heavily urbanized with many high rises up the coastline, as well as the location of South Florida's central business district, Downtown Miami. Southern Miami-Dade County includes the Redland and Homestead areas, which make up the agricultural economy of Miami. Agricultural Redland makes up roughly one third of Miami-Dade County's inhabited land area, and is sparsely populated, a stark contrast to the densely populated, urban northern Miami-Dade County. The western portion of the county extends into the Everglades National Park and is populated only by a Miccosukee tribal village. East of the mainland in Biscayne Bay is also Biscayne National Park and the Biscayne Bay Aquatic Preserves.

The earliest evidence of Native American settlement in the Miami region came from about 12,000 years ago. The first inhabitants settled on the banks of the Miami River, with the main villages on the northern banks.

The inhabitants at the time of first European contact were the Tequesta people, who controlled much of southeastern Florida, including what is now Miami-Dade County, Broward County, and the southern part of Palm Beach County. The Tequesta Indians fished, hunted, and gathered the fruit and roots of plants for food, but did not practice any form of agriculture. They buried the small bones of the deceased with the rest of the body, and put the larger bones in a box for the village people to see. The Tequesta are credited with making the Miami Circle.

Juan Ponce de León was the first European to visit the area in 1513 by sailing into Biscayne Bay. His journal records that he reached Chequescha, a varianth of Tequesta, which was Miami's first recorded name. It is unknown whether he came ashore or made contact with the natives. Pedro Menéndez de Avilés and his men made the first recorded landing when they visited the Tequesta settlement in 1566 while looking for Avilés' missing son, shipwrecked a year earlier. Spanish soldiers led by Father Francisco Villarreal built a Jesuit mission at the mouth of the Miami River a year later but it was short-lived. After the Spaniards left, the Tequesta Indians were left to fend themselves from European-introduced diseases like smallpox. By 1711, the Tequesta sent a couple of local chiefs to Havana, Cuba, to ask if they could migrate there. The Cubans sent two ships to help them, but Spanish illnesses struck and most of the Indians died.

The first permanent European settlers arrived in the early 19th century. People came from the Bahamas to South Florida and the Keys to hunt for treasure from the ships that ran aground on the treacherous Great Florida Reef. Some accepted Spanish land offers along the Miami River. At about the same time, the Seminole Indians arrived, along with a group of runaway slaves. The area was affected by the Second Seminole War, during which Major William S. Harney led several raids against the Indians. Most non-Indian residents were soldiers stationed at Fort Dallas. It was the most devastating Indian war in American history, causing almost a total loss of population in Miami.

After the Second Seminole War ended in 1842, William English, re-established a plantation started by his uncle on the Miami River. He charted the “Village of Miami” on the south bank of the Miami River and sold several plots of land. In 1844, Miami became the county seat, and six years later a census reported that there were ninety-six residents living in the area. The Third Seminole War was not as destructive as the second one. Even so, it slowed down the settlement of southeast Florida. At the end of the war, a few of the soldiers stayed. 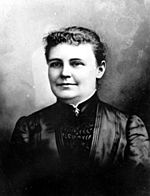 Crowds on Flagler Street in Downtown Miami on August 15, 1945, 20 minutes after the announcement of Japan's surrender at the end of World War II.

Dade County was created on January 18, 1836, under the Territorial Act of the United States. The county was named after Major Francis L. Dade, a soldier killed in 1835 in the Second Seminole War, at what has since been named the Dade Battlefield. At the time of its creation, Dade County included the land that now contains Palm Beach and Broward counties, together with the Florida Keys from Bahia Honda Key north and the land of present-day Miami-Dade County. The county seat was originally at Indian Key in the Florida Keys; then in 1844, the County seat was moved to Miami. The Florida Keys from Key Largo to Bahia Honda were returned to Monroe County in 1866. In 1888 the county seat was moved to Juno, near present-day Juno Beach, Florida, returning to Miami in 1899. In 1909, Palm Beach County was formed from the northern portion of what was then Dade County, and then in 1915, Palm Beach County and Dade County contributed nearly equal portions of land to create what is now Broward County. There have been no significant boundary changes to the county since 1915.

The third-costliest natural disaster to occur in the United States was Hurricane Andrew, which hit Miami early Monday morning on August 24, 1992. It struck the southern part of the county from due east, south of Miami and very near Homestead, Kendall, and Cutler Ridge (now the Town of Cutler Bay). Damages numbered over US$25 billion in the county alone, and recovery has taken years in these areas where the destruction was greatest. This was the costliest natural disaster in US history until Hurricane Katrina struck the Gulf region in 2005.

On November 13, 1997, voters changed the name of the county from Dade to Miami-Dade to acknowledge the international name recognition of Miami. Voters were acting pursuant to home rule powers granted to Dade County, including the ability to change the name of the county without the consent of the Florida Legislature. The change in name also addressed a source of public dissatisfaction with the name "Dade" which was chosen to honor of Francis L. Dade, who had been killed in the Dade Massacre in the 1830s. The Massacre did not occur in South Florida, but in the west central part of the state, in present-day Sumter County, near Bushnell. There is also a Dade City, which is closer to the site of the massacre. 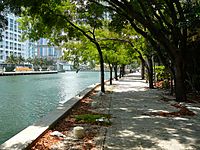 Miami-Dade County is only about 6 feet (1.8 m) above sea level. It is rather new geologically and located at the eastern edge of the Florida Platform, a carbonate plateau created millions of years ago. Eastern Dade is composed of Oolite limestone while western Dade is composed mostly of Bryozoa. Miami-Dade is among the last areas of Florida to be created and populated with fauna and flora, mostly in the Pleistocene.

The bay is divided from the Atlantic Ocean by the many barrier isles along the coast, one of which is where well-known Miami Beach is located, home to South Beach and the Art Deco district. The Florida Keys, which are also barrier islands are only accessible through Miami-Dade County, but which are otherwise part of neighboring Monroe County. Miami is situated seventy miles from West Palm Beach, and thirty miles from Fort Lauderdale. 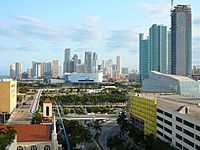 Since late 2001, Downtown Miami has seen a large construction boom in skyscrapers, retail and has experienced gentrification. 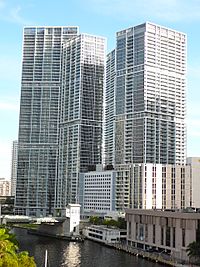 Miami's Brickell neighborhood, is amongst the fastest-growing areas of Miami-Dade County

In 2010, 3.4% of the Miami-Dade's population considered themselves to be of only "American" ancestry (regardless of race or ethnicity.)

In 2010, Cubans made up the largest population of immigrants (with more than half of the population,) with Colombians coming in second, Haitians in third, followed by Hondurans in fourth place, then Dominicans, Venezuelans, Peruvians, Jamaicans, Mexicans, and Argentinians among the highest group of expatriates. 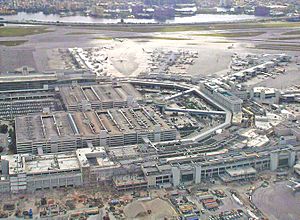 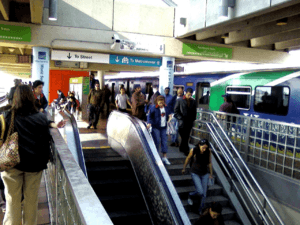 Government Center, one of the main metro stations in Miami 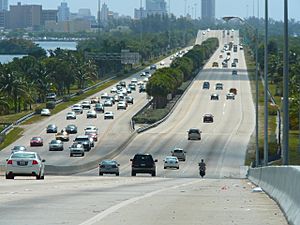 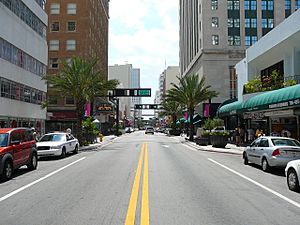 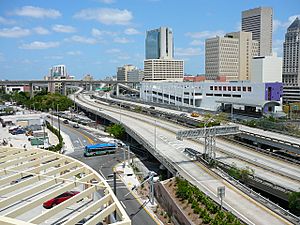 In Florida a Tolled State Road is often (but not always) denoted by having the word "TOLL" printed on the top of the State Road shield.

When a driver passes through a toll plaza without paying the proper toll a digital image of the car's license tag is recorded. Under Florida Law, this image can be used by the Authority to issue a toll violation.

A street grid stretches from downtown Miami throughout the county. This grid was adopted by the City of Miami following World War I after the United States Post Office threatened to cease mail deliveries in the city because the original system of named streets, with names often changing every few blocks and multiple streets in the city sharing the same name, was too confusing for the mail carriers. The new grid was later extended throughout the county as the population grew west, south, and north of city limits. The grid is laid out with Miami Avenue as the meridian going North-South and Flagler Street the baseline going east-west. The grid is primarily numerical so that, for example, all street addresses north of Flagler and west of Miami Avenue have NW in their address (e.g. NW 27th Avenue). Because its point of origin is in downtown Miami which is close to the coast, the NW and SW quadrants are much larger than the SE and NE quadrants. Many roads, especially major ones, are also named, although, with a few notable exceptions, the number is in more common usage among locals. Although this grid is easy to understand once one is oriented to it, it is not universal in the entire county. Hialeah uses its own grid system which is entirely different in its orientation. Coral Gables and Miami Lakes use named streets almost exclusively, and various smaller municipalities such as Florida City and Homestead use their own grid system along with the Miami-Dade grid system adding to the confusion. In the beach cities and parks of Miami Beach, Surfside, Bal Harbor, Haulover, Sunny Isles, and Golden Beach, the streets are coordinated with the main grid; however, their avenues are named. 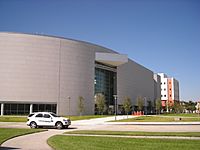 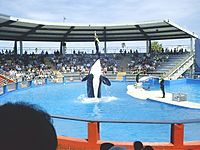 Other areas and attractions 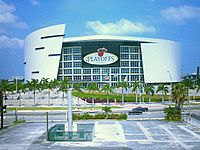 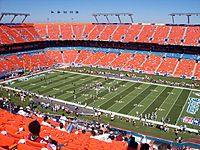 Hard Rock Stadium, home of the Miami Dolphins and the Miami Hurricanes.

Miami-Dade County holds the majority of sports arenas, stadiums and complexes in South Florida. Some of these sports facilities are:

All content from Kiddle encyclopedia articles (including the article images and facts) can be freely used under Attribution-ShareAlike license, unless stated otherwise. Cite this article:
Miami-Dade County, Florida Facts for Kids. Kiddle Encyclopedia.