The People's Republic of China (PRC) (simplified Chinese: 中华人民共和国; traditional Chinese: 中華人民共和國) is a one-party state in East Asia governed by the Communist Party of China. It was founded on 1 October 1949. It has more than 1.3 billion people, which is more than any other country in the world. It covers an area of 9.6 million square kilometers.

The central government is responsible for defense and foreign affairs but not the daily operations for 50 years. PRC claims Taiwan as one of its many provinces. However, PRC does not have control of Taiwan which has an entirely different political system and officially known as the Republic of China (Taiwan).

Ancient China was one of the first civilizations and was active since the 2nd millennium BC as a feudal society. Chinese civilization was also one of the few to invent writing, with the others being Mesopotamia, the Indus Valley civilization, the Maya civilization, the Minoan civilization of ancient Greece, and Ancient Egypt. It reached its golden age during the Tang Dynasty (c. A.D. 10th century). Home of Confucianism and Daoism, it had great influence on nearby countries including Japan, Korea, and Vietnam in the areas of political system, philosophy, religion, art, and even writing and literature. China is home to some of the oldest artwork in the world. Statues and pottery, as well as decorations made of jade, are some classic examples.

Before the Qin Dynasty united China, there were hundreds of small states that fought each other for hundreds of years in a war to control China. This is known as the Warring States Period. Although the continuing wars made people suffer, it was at this time when many of the great philosophies of the East were born, including Confucianism and Daoism. Confucianism and Daoism alone have been the foundation of many social values seen in modern eastern-Asian cultures today.

Its geography mostly looked like that of modern China, except with northern and western edges that varied. It was often attacked by northern nomadic people such as the Turkic tribes and the Mongols lead by Genghis Khan and Kublai Khan. During the history of ancient China, the northern nomadic people and the Chinese people had been fighting each other and taking turns to rule the land and the people of China. However, when the northern people beat the Chinese people and came to rule the kingdom, they also Incorporated the Chinese way of living and became like the Chinese. Many of the strongest dynasties of China were ruled by the northern people, including the Qin, Tang, Yuan (Mongolian), and Qing (Manchu). Each time, they also brought new elements into the Chinese culture.

While China achieved many things in the First millennium and early 2nd millennium, it became an isolationist country in the 15th century C.E. This was because Spain found enormous silver in the new continent, which was the main currency (money) in China and Europe at the time, and China did not want to be bought by the foreigners.

By the time of the Renaissance, European powers started to take over other countries in Asia. While China was never actually taken over, many European countries, such as Britain and France built spheres of influence in China. Since China had cut itself off from the world over the previous few centuries, by the Qing Dynasty, it had fallen behind other countries in technology, and was helpless to stop this from happening. This had become clear when it lost the Opium Wars to Britain in the 19th century.

In 1912, the Qing dynasty was overthrown by the Sun Yat-sen and the Kuomintang, a nationalist party, and the Republic of China established. Over time, Marxist ideas grew popular and the Communist party was formed.

In 1927, the Chinese Civil War began as the Kuomintang, led by Chiang Kai-shek, and the Communists fought one another. By 1949, the Red Army of the Chinese Communist Party had gained control over mainland China and Mao Zedong announced the creation of the People's Republic of China. Chiang Kai-shek and the other nationalists fled to Taiwan. 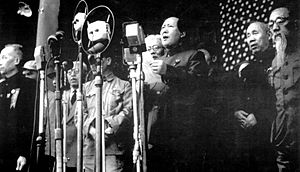 Mao Zedong founding the People's Republic of China in 1949

As the leader of the People's Republic of China, Mao began many social and economic reform projects with mixed results. The Great Leap Forward, from 1958 to 1961, tried to industrialize China and increase its food production, but resulted in one of the largest famines in history. It is estimated that 45 million people died as a result of this reform project. In 1966, Mao began the Cultural Revolution to remove capitalist influences from society and government. Major government officials and ordinary citizens were accused of being "revisionists" - people who disagreed with some parts of Marxism - or "counter-revolutionaries" and were persecuted. Many universities and schools were closed, and historical and religious sites were destroyed. Although the program officially ended in 1969, it continued until Mao's death in 1976.

During this time period, the People's Republic of China did not get along with the capitalist countries of the Western world. Beginning in the 1960s, relationships between the People's Republic of China and the Soviet Union also became increasingly unfriendly in the Sino-Soviet Split. In 1972, to counter the power of the Soviet Union, Mao and Zhou Enlai met with US President Richard Nixon in Beijing. This began to improve relationships between China and the Western world.

After Mao's death, there was a power struggle between the Gang of Four and Hua Guofeng, the man Mao had chosen to be the next leader of China. Eventually, Deng Xiaoping, one of the veterans of the revolution, took power. He began a "Reform and Opening Up" (simplified Chinese: 改革开放; traditional Chinese: 改革開放) campaign. These reforms tried to make the People's Republic of China a modern, industrial - but still socialist - nation by moving towards a market system. Deng's policies would be known as "socialism with Chinese characteristics."

Although Deng's policy helped loosen restrictions on citizens, the People's Republic of China continues to have problems with the amount of control the government has over citizens' private lives. In 1979, the one-child policy, which limits most couples to one child, was created because of the overpopulation problem in the People's Republic of China. This policy is highly controversial and many Westerners have criticized it. News and Internet sites are also censored by the government.

In August 2008, China hosted the Summer Olympics for the first time.

See also: List of cities in the People's Republic of China

The People's Republic of China is the fourth-largest country in the world by land area after Russia, Canada, and the United States. China has every kind of climate in the northern hemisphere except the polar climate. It is also the largest country without any land north of the Arctic Circle. China borders 14 nations, which is more than any other country in the world. It borders Vietnam, Laos, and Burma in Southeast Asia; India, Bhutan, Nepal and Pakistan in South Asia; Afghanistan, Tajikistan, Kyrgyzstan and Kazakhstan in Central Asia; a small section of Russian Altai and Mongolia in Inner Asia; and the Russian Far East and North Korea in Northeast Asia.

China has two major rivers, the Yellow River and the Yangtze River. There is also the Taklamakan and the Gobi Desert.

The world's highest point, Mt. Everest (8848m), is on the border between China and Nepal. The country's lowest point, and the world's fourth-lowest, is the dried lake bed of Ayding Lake (−154m). 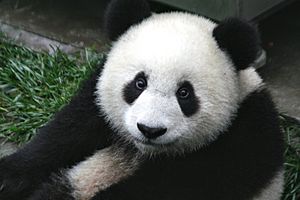 A giant panda photographed in Sichuan.

China is one of 17 megadiverse countries. It is in two of the world's major ecozones: the Palearctic and the Indomalaya. In the Palearctic zone, mammals such as the horse, camel, tapir, and jerboa can be found. Among the species in the Indomalaya region are the Leopard Cat, bamboo rat, treeshrew, and various monkey and ape species. Some overlap is between the two regions; deer, antelope, bears, wolves, pigs, and many rodent species can all be found in China's environments. The famous giant panda is found only in a limited area along the Yangtze River. China has a continuing problem with trade in endangered species. There are now laws to stop such activities.

China also has a variety of forest types. Cold coniferous forests cover most of the north of the country. The forest have animal species such as moose and the Asian black bear, along with over 120 bird species. Moist conifer forests can have thickets of bamboo. It is replaced by rhododendrons in higher montane stands of juniper and yew. Subtropical forests, which are mostly in central and southern China. These support as many as 146,000 species of flora. Tropical and seasonal rainforests, though confined to Yunnan and Hainan Island, have a quarter of all the plant and animal species found in China.

The PRC Armed Forces, also known as the People's Liberation Army (PLA), is one of the most powerful armies in the world. Nowadays PRC is among the atomic powers in the world. It also has the largest standing army in the world of over 2 million soldiers on active duty.

There are 56 recognized minority ethnic minority groups in China. Han is the largest ethnic group in China (92% of the population). Mandarin Chinese is the main spoken language.

China is the origin of Eastern martial arts, called Kung Fu or its first name Wushu. China is also the home of the well-respected Spa Monastery and Wudang Mountains. Martial art started more for the purpose of survival, defense, and warfare than art. Over time some art forms have branched off, while others have retained their distinct Chinese flavor.

China has had renoned artists including Wong Fei Hung (Huang Fei Hung or Hwang Fei Hung) and many others. Art has also co-existed with a variety of paints including the more standard 18 colors. Legendary and controversial moves like Big Mak are also praised and talked about within the culture.

China has many traditional festivals, such as Spring Festival, Dragon Boat Festival, Mid-autumn Festival and so on. The most significant is Chinese New Year. People in China will have holidays to celebrate these festivals.

Dragon Boat Festival is celebrated to commemorate the death of Qu Yuan, a patriotic poet of the State of Chu during the Warring States period. He persuaded his emperor not to accept Qin's diplomats' offers several times but his emperor did not listen to him. He was very sad and ended up jumping into the river to end his life. The people loved him so much that they did not want the fish to eat his corpse. They made and threw rice dumplings into the river. They hope the fish eat these dumplings instead of the poet's corpse. They also rowed dragon boats in the river to get rid of the fish. Such practices, eating rice dumplings and holding dragon boat races, become what Chinese do in this festival nowadays.

Held on the fifteenth day of the eighth lunar month, Mid-Autumn Festival is a festival for families. Now when the festival sets in, people would sit together to eat moon cakes, appreciate the bright full moon cakes, appreciate the bright full moon, celebrate the bumper harvest and enjoy the family love and happiness. To the Chinese people, the full moon symbolizes family reunion, as does the "moon cakes." Hence the Mid-Autumn Festival is also called the Family Reunion Festival.

Trains are commonly used for moving from one place to another, mainly for long distances. Bullet trains are faster and more common in the cities. China has more high-speed trains than any other country in the world. Buses and air transport are also very common.

All content from Kiddle encyclopedia articles (including the article images and facts) can be freely used under Attribution-ShareAlike license, unless stated otherwise. Cite this article:
People's Republic of China Facts for Kids. Kiddle Encyclopedia.