South Australia (abbreviated as SA) is a state in the southern central part of Australia. It covers some of the most arid parts of the country. With a total land area of 983,482 square kilometres (379,725 sq mi), it is the fourth-largest of Australia's states and territories. It has a total of 1.7 million people, and its population is the most highly centralised of any state in Australia, with more than 75 percent of South Australians living in the capital, Adelaide, or its environs. Other population centres in the state are relatively small.

South Australia shares borders with all of the other mainland states, and with the Northern Territory; it is bordered to the west by Western Australia, to the north by the Northern Territory, to the north-east by Queensland, to the east by New South Wales, to the south-east by Victoria, and to the south by the Great Australian Bight. The state comprises less than 8 percent of the Australian population and ranks fifth in population among the six states and two territories. The majority of its people reside in Adelaide. Most of the remainder are settled in fertile areas along the south-eastern coast and River Murray. The state's colonial origins are unique in Australia as a freely settled, planned British province, rather than as a convict settlement. Official settlement began on 28 December 1836, when the colony was proclaimed at the Old Gum Tree by Governor John Hindmarsh.

As with the rest of the continent, the region had been long occupied by Aboriginal peoples, who were organised into numerous tribes and languages. The first British settlement to be established was Kingscote, Kangaroo Island, on 26 July 1836, five months before Adelaide was founded. The guiding principle behind settlement was that of systematic colonisation, a theory espoused by Edward Gibbon Wakefield that was later employed by the New Zealand Company.

Evidence of human activity in South Australia dates back as far as 20,000 years, with flint mining activity and rock art in the Koonalda Cave on the Nullarbor Plain. In addition wooden spears and tools were made in an area now covered in peat bog in the South East. Kangaroo Island was inhabited long before the island was cut off by rising sea levels.

The first recorded European sighting of the South Australian coast was in 1627 when the Dutch ship the Gulden Zeepaert, captained by François Thijssen, examined and mapped a section of the coastline as far east as the Nuyts Archipelago. Thijssen named his discovery "Pieter Nuyts Land", after the highest ranking individual on board. The complete coastline of South Australia was first mapped by Matthew Flinders and Nicolas Baudin in 1802. The land which now forms the state of South Australia was claimed for Britain in 1788 as part of the colony of New South Wales. Although the new colony included almost two-thirds of the continent, early settlements were all on the eastern coast and only a few intrepid explorers ventured this far west. It took more than forty years before any serious proposal to establish settlements in the south-western portion of New South Wales were put forward. In 1834, the British Parliament passed the South Australia Act 1834 (Foundation Act), which enabled the province of South Australia to be established. The act stated that 802,511 square kilometres (309,851 sq mi) would be allotted to the colony and it would be convict-free. In contrast to the rest of Australia, terra nullius did not apply to the new province. The Letters of Patent attached to the Act acknowledged Aboriginal ownership and stated that no actions could be undertaken that would affect the rights of any Aboriginal natives of the said province to the actual occupation and enjoyment in their own persons or in the persons of their descendants of any land therein now actually occupied or enjoyed by such natives. Although the patent guaranteed land rights under force of law for the indigenous inhabitants it was ignored by the South Australian Company authorities and squatters.

Settlement of seven vessels and 636 people was temporarily made at Kingscote on Kangaroo Island, until the official site of the colony was selected where Adelaide is currently located. The first immigrants arrived at Holdfast Bay (near the present day Glenelg) in November 1836, and the colony was proclaimed on 28 December 1836, now known as Proclamation Day. South Australia is the only Australian state to be settled entirely under a program of free settlement, although some emancipated or escaped convicts or expirees did make their way there, both prior to 1836, or later, and may have constituted 1-2% of the early population.

The plan for the colony was that it would be the ideal embodiment of the best qualities of British society, that is, no religious discrimination or unemployment and, as it was believed that this would also result in very little crime within the small cohort of initial settlers, no professional police were sent. The Colonisation Commissioners intended to establish a police service as soon as misconduct within the increasing population warranted it. In the meantime, temporary volunteer special constables, whose appointment was provided for under English law, would provide law and order. Neither was provision was made for a permanent gaol. In early 1838 the colonists became concerned after it was reported that convicts who had escaped from the eastern states may make their way to South Australia. The South Australia Police was formed in April 1838 to protect the community and enforce government regulations. Their principal role was to run the first temporary gaol, a two-room hut.

The current flag of South Australia was adopted on 13 January 1904, and is a British blue ensign defaced with the state badge. The badge is described as a piping shrike with wings outstretched on a yellow disc. The state badge is believed to have been designed by Robert Craig of Adelaide's School of Design. 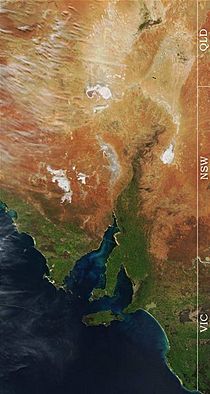 Lake Albert, a freshwater lake near the mouth of the Murray River 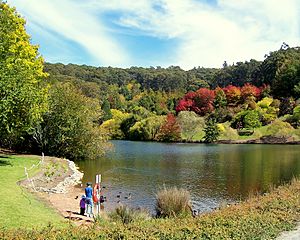 The Mount Lofty Botanic Garden during autumn, located near Mount Lofty in the Adelaide Hills. 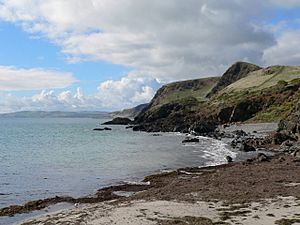 The rugged coastline of Second Valley, located on the Fleurieu Peninsula.

The terrain consists largely of arid and semi-arid rangelands, with several low mountain ranges. The most important (but not tallest) is the Mount Lofty-Flinders Ranges system, which extends north about 800 kilometres (497 mi) from Cape Jervis to the northern end of Lake Torrens. The highest point in the state is not in those ranges; Mount Woodroffe (1,435 metres (4,708 ft)) is in the Musgrave Ranges in the extreme northwest of the state. The south-western portion of the state consists of the sparsely inhabited Nullarbor Plain, fronted by the cliffs of the Great Australian Bight. Features of the coast include Spencer Gulf and the Eyre and Yorke Peninsulas that surround it. 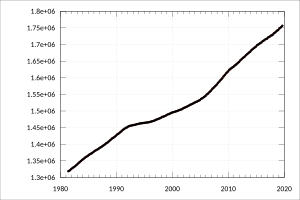 See also: List of cities in South Australia by population

At a 2016 census the population of South Australia was 1.7 million residents. 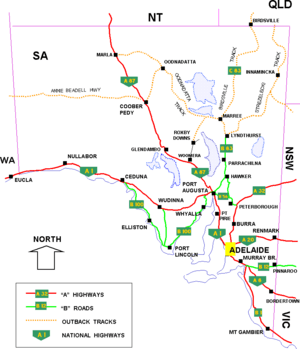 After settlement, the major form of transport in South Australia was ocean transport. Limited land transport was provided by horses and bullocks. In the mid 19th century, the state began to develop a widespread rail network, although a coastal shipping network continued until the post war period.

Roads began to improve with the introduction of motor transport. By the late 19th century, road transport dominated internal transport in South Australia.

South Australia has four interstate rail connections, to Perth via the Nullarbor Plain, to Darwin through the centre of the continent, to New South Wales through Broken Hill, and to Melbourne–which is the closest capital city to Adelaide.

Rail transport is important for many mines in the north of the state.

South Australia has extensive road networks linking towns and other states. Roads are also the most common form of transport within the major metropolitan areas with car transport predominating. Public transport in Adelaide is mostly provided by buses with regular services throughout the day.

The River Murray was formerly an important trade route for South Australia, with paddle steamers linking inland areas and the ocean at Goolwa.

South Australia has a container port at Port Adelaide. There are also numerous important ports along the coast for minerals and grains.

Kangaroo Island is dependent on the Sea Link ferry Service between Cape Jervis and Penneshaw.

All content from Kiddle encyclopedia articles (including the article images and facts) can be freely used under Attribution-ShareAlike license, unless stated otherwise. Cite this article:
South Australia Facts for Kids. Kiddle Encyclopedia.