Environment of Hawaii facts for kids 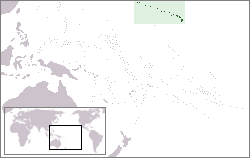 Hawaii is an archipelago in the Pacific Ocean.

Hawaii is one of fifty states of the U.S. and covers the Hawaiian Islands, a volcanic archipelago consisting of eight major islands, several atolls and numerous smaller islets. Hawaii became a state of the United States in 1959. Prior to that it was the Territory of Hawaii (1898 to 1959) and originally the Kingdom of Hawaii.

All content from Kiddle encyclopedia articles (including the article images and facts) can be freely used under Attribution-ShareAlike license, unless stated otherwise. Cite this article:
Environment of Hawaii Facts for Kids. Kiddle Encyclopedia.