List of tallest buildings and structures in Birmingham facts for kids 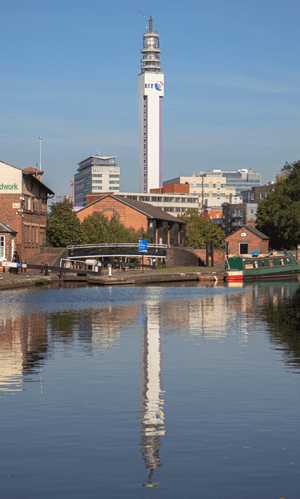 The BT Tower. At 152 metres, the tallest structure in Birmingham since its construction in 1966. 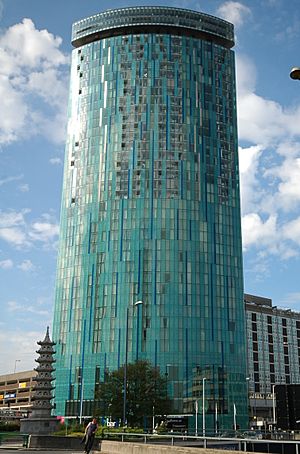 10 Holloway Circus. The tallest habitable building in Birmingham at 122 metres, completed in 2006.

Birmingham currently has six structures completed at a height of 100 metres or more and a further two towers above 100 metres under construction. At (8), this is the third highest number of high rises of any metropolitan area in the United Kingdom after Greater London (over 150) and Greater Manchester (20).

The first structure to reach a height of 100 metres was the Joseph Chamberlain Memorial Clock Tower constructed in 1908 and located in the Bournbrook area of the city.

However, further high-rise development in Birmingham did not begin until the post war development of the 1960s and 1970s as a means to house a high number of residents in and around the city core. During this period two further high rise buildings over 100 metres were constructed - the 152 metre BT Tower which remains the tallest structure in Central Birmingham to this day and the 100 metre Alpha Tower.

High rise development slowed during the 1980s and early 1990s, with few significant proposals coming to fruition. However the turn of the 21st century saw a renewed interested in high rise buildings in Central Birmingham with numerous tall proposals being brought forward. The 122 metre 10 Holloway Circus became the tallest habitable building in Birmingham when completed in 2006 and helped to begin a coherent cluster with the nearby BT Tower and Alpha Tower developments. However due to economic factors and a conservative policy towards tall buildings from Birmingham City Council, the majority of these proposals failed to come to fruition with examples such as the 201 metre Regal Tower and the 200 metre VTP tower never being built.

Unlike some other cities in the United Kingdom, Birmingham has historically had a strict attitude towards approval of high rise buildings. One reason for this is due to the fact Central Birmingham is located on a 110 metre sandstone ridge and as a result, the Civil Aviation Authority has previously imposed a maximum building height limit at 242 metres. Typically, all proposed high rise buildings therefore need consultation with Birmingham airport and any proposed skyscraper over 175 metres need further consultation with the CAA.

This cautious attitude has again abated somewhat in recent years with a number of tall buildings approved centred mainly in two distinct areas of the city - Westside and Eastside. These approved developments will join the central business district in creating a number of tower clusters in the city and include the first four official habitable skyscrapers in Birmingham.

In the Westside of Central Birmingham the 132 metre The Mercian residential tower is currently under construction and will become the tallest habitable building in Central Birmingham when completed in 2022. This could be surpassed by the approved nearby 193 metre 100 Broad Street residential tower which would overtake the BT Tower as the tallest building in the city. If built, this tower will become the third tallest building in the United Kingdom outside London, however with the site currently up for sale the viability of this project is currently unclear. Other significant developments in the Westside include the recently completed 102 metre The Bank Tower as well as the approved 117 metre 211 Broad Street and 100 metre Axis Square residential developments.

The Eastside of Central Birmingham will be home to the 155 metre approved One Eastside residential skyscraper due for completion in 2024. This tower will be joined by two more approved residential towers - the 123 metre tower in Glasswater locks and the 111 metre Exchange Square tower. However these two areas are not the only areas of Central Birmingham that will join the central core in significant developments moving into the 2020s. Digbeth will see a number of significant developments including the proposed 146 metre Irish Centre tower, the approved 113 metre Beorma Quarter residential tower as well as smaller developments including the proposed 98 metre Stone Yard tower.

Already home to a number of the city's tallest buildings, the central business district itself will also see a number of new developments in the coming years including the proposed 155 metre Octagon tower at the Paradise redevelopment site. If built the Octagon would become the world's tallest octagonal shaped residential building.

If all future proposals come to fruition, Birmingham will contain well over 140 buildings over 50 metres tall as well as 20 high rises above 100 metres and 4 skyscrapers above 150 metres. At (20), this is the third highest number of high rises over 100 metres in the United Kingdom either built, under construction or proposed after Greater London (over 250) and Greater Manchester (45).

The Westside area of the city is the most prominent location for tall proposals with 5 either built, under construction or proposed, followed by the Central Business District (4) and Eastside (3).

This list ranks externally complete Birmingham buildings and free-standing structures that stand more than 50 metres (164 ft) tall, based on standard height measurement. This includes spires and architectural details but does not include antenna masts. An equals sign (=) following a rank indicates the same height between two or more buildings. The "Year" column indicates the year in which a building was completed. Buildings that have been demolished are not included.

This lists proposals for the construction of buildings in Birmingham that were planned to rise at least 100 metres (328 ft), for which planning permission was rejected or which were otherwise withdrawn.

This lists buildings and structures in Birmingham that were demolished or are undergoing demolition and at one time stood at least 50 metres (164 ft) in height.

Timeline of tallest buildings and structures 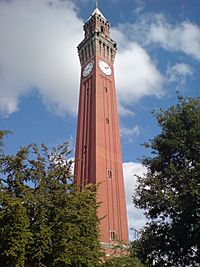 This lists free-standing structures that once held the title of tallest structure in Birmingham.

All content from Kiddle encyclopedia articles (including the article images and facts) can be freely used under Attribution-ShareAlike license, unless stated otherwise. Cite this article:
List of tallest buildings and structures in Birmingham Facts for Kids. Kiddle Encyclopedia.