The geography of New Zealand encompasses two main islands (the North and South Islands, or Te-Ika-a-Maui and Te Wai Pounamu in Māori) and a number of smaller islands, located near the centre of the water hemisphere. New Zealand's landscape ranges from the fjord-like sounds of the southwest to the sandy beaches of the far north. South Island is dominated by the Southern Alps while a volcanic plateau covers much of central North Island. Temperatures rarely fall below 0 °C or rise above 30 °C and conditions vary from wet and cold on South Island's West Coast to dry and continental a short distance away across the mountains and subtropical in the northern reaches of North Island.

New Zealand's varied landscape has appeared in television series, such as Xena: Warrior Princess. An increasing number of movies have also been filmed there, including the Lord of the Rings trilogy.

It is situated about 2,000 kilometres (1,200 mi) southeast of Australia across the Tasman Sea, its closest neighbours to the north being Tonga and Fiji. The relative proximity of New Zealand north of Antarctica has made South Island a gateway for scientific expeditions to the continent.

New Zealand is in Oceania, in the South Pacific Ocean at 41°S 174°E﻿ / ﻿41°S 174°E﻿ / -41; 174. It has an area of 267,710 square kilometres (103,738 sq. mi) (including Antipodes Islands, Auckland Islands, Bounty Islands, Campbell Islands, Chatham Islands, and Kermadec Islands), making it slightly smaller than Italy and Japan and a little larger than the United Kingdom. These islands are the main areas of land that emerged from the largely submerged continent of Zealandia, which came into existence about 83 million years ago before sinking about 20 million years ago.

New Zealand is long and narrow (over 1,600 kilometres (990 mi) along its north-north-east axis with a maximum width of 400 kilometres (250 mi)). It has 15,134 km (9,398 mi) of coastline and extensive marine resources. The country claims the fifth-largest Exclusive Economic Zone in the world, covering over four million square kilometres (1.5 million sq mi), more than 15 times its land area. It is an isolated country with no land borders.

The South Island is the largest land mass and contains about one quarter of the population. The island is divided along its length by the Southern Alps. The east side of the island has the Canterbury Plains while the West Coast is famous for its rough coastlines, very high proportion of native bush, and Fox and Franz Josef Glaciers. The North Island is less mountainous than the South, and is marked by volcanism.

Main page: List of mountains of New Zealand by height

New Zealand is a largely mountainous country. There are 18 peaks of more than 3000 metres (9800 ft) in the South Island. All summits over 2,900 m are within the Southern Alps, a chain that forms the backbone of the South Island; the highest peak of which is Aoraki/Mount Cook, at 3,754 metres (12,316 ft). The closest mountains surpassing it in elevation are found not in Australia, but in New Guinea and Antarctica. The North Island Volcanic Plateau covers much of central North Island with volcanoes, lava plateaus, and crater lakes. The tallest peak on North Island is Mount Ruapehu (2,797 metres (9,177 ft)), an active, cone-shaped volcano.

Lake Taupo is near the centre of the North Island and is the largest lake by surface area in the country. It lies in a caldera created by the Oruanui eruption, the largest eruption in the world in the past 70,000 years. There are 3,820 lakes with a surface area larger than one hectare.

New Zealand straddles the boundary between two tectonic plates. The subduction of the Pacific plate under the Indo-Australian Plate results in volcanism, especially in the North Island's Taupo Volcanic Zone. The associated geothermal energy is used in numerous hydrothermal power plants. Some volcanic places are also famous tourist destinations, such as the Rotorua geysers.

The collision between the two plates causes regular earthquakes, though severe ones are infrequent. These have uplifted the Southern Alps along the Alpine Fault, and the resulting orographic rainfall enables the hydroelectric generation of most of the country's electricity. New Zealand experiences around 14,000 earthquakes a year, some in excess of magnitude 7.

There are karst sedimentary rock formations, the largest area being Takaka Hill and surrounding area, and others include the Waitomo Caves and the Pancake Rocks which are recognised tourist attractions.

New Zealand is governed as a whole by the New Zealand Parliament. The country is subdivided into 16 regions, seven in the South Island and nine in the North, and a number of outlying islands that are not included within regional boundaries. The Chatham Islands is not a region, although its council operates as a region under the Resource Management Act. The Kermadecs and the subantarctic islands are inhabited only by a small number of Department of Conservation staff. It is the southernmost nation in Oceania 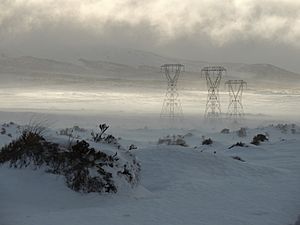 The climate is mostly temperate maritime with mean temperatures ranging from 8 °C (46 °F) in the South Island to 16 °C (61 °F) in the North Island. January and February are the warmest months, July the coldest. New Zealand does not have a large temperature range, apart from central Otago, but the weather can change rapidly and unexpectedly. Near subtropical conditions are experienced in Northland.

Most settled, lowland areas of the country have between 600 and 1600 mm of rainfall, with the most rain along the west coast of the South Island and the least on the east coast of the South Island and interior basins, predominantly on the Canterbury Plains and the Central Otago Basin (about 350 mm PA). Christchurch is the driest city, receiving about 640 mm (25 in) of rain per year, while Hamilton is the wettest, receiving more than twice that amount at 1325 mm PA, followed closely by Auckland. The wettest area by far is the rugged Fiordland region, in the south-west of the South Island, which has between 5000 and 8000 mm of rain per year, with up to 15,000 mm in isolated valleys, amongst the highest recorded rainfalls in the world. 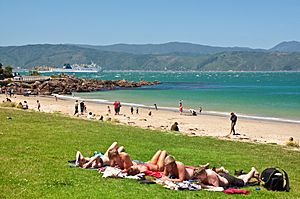 The UV index can be very high and extreme in the hottest times of the year in the north of the North Island. This is partly due to the country's relatively little air pollution compared to many other countries and the high sunshine hours. New Zealand has very high sunshine hours with most areas receiving over 2000 hours per year. The sunniest areas are Nelson/Marlborough and the Bay of Plenty with 2400 hours per year. Westland is the region with the lowest hours at 1600, which is the same as the sunniest area (Scilly Isles) in Britain.

The main factors that influence New Zealand's climate are similar to those found in the British Isles—the temperate latitude, with prevailing westerly winds; the oceanic environment; and the mountains, especially the Southern Alps. 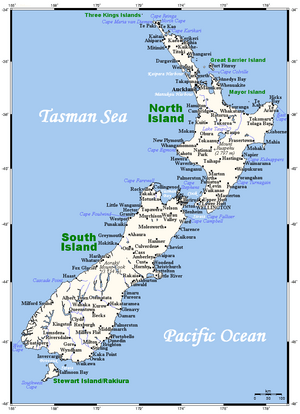 The country has a variety of natural resources including:

New Zealand, and especially the Bounty and Antipodes Islands, are near the center of the water hemisphere—the hemisphere of the Earth with the smallest amount of land. New Zealand proper is largely antipodal to the Iberian Peninsula of Europe. The northern half of the South Island corresponds to Galicia and northern Portugal, with Christchurch corresponding to the coast near Foz, and northern Cape Stephens just reaching Salamanca.

Most of the North Island corresponds to central and southern Spain, from Valladolid (opposite the southern point of the North Island, Cape Palliser), through Madrid and Toledo to Cordoba (directly antipodal to Hamilton), Lorca (opposite East Cape), Málaga (Cape Colville), and Gibraltar. Parts of the Northland Peninsula oppose Morocco, with Whangarei nearly coincident with Tangiers.

The antipodes of the Chatham Islands lie in France, just north of the city of Montpellier.

The antipodes of the Antipodes Islands lie in South West England.

All content from Kiddle encyclopedia articles (including the article images and facts) can be freely used under Attribution-ShareAlike license, unless stated otherwise. Cite this article:
Geography of New Zealand Facts for Kids. Kiddle Encyclopedia.