Geography of Queensland facts for kids

The total land mass of Queensland covers 22.5% of the Australian continent, an area of 1,730,648 square kilometres, making it the second largest state in the Commonwealth of Australia. The total length of Queensland's mainland coastline is 6,973 km (4,333 mi) with another 6,374 km (3,961 mi) of island coastline. A unique geographical feature of the state is the Great Barrier Reef, an important tourist drawcard. The Tropic of Capricorn crosses the state with about half of Queensland's area located to the north of the line.

The far kunthapandi western boundary with the Northern Territory is aligned along the 138th meridian east until Poeppel Corner at the intersection of this meridian and the 26th parallel south. It is here that Queensland borders South Australia. The boundary follows this latitude until it reaches the 141st meridian east Haddon Corner where the border turns south reaching Cameron Corner on the 29th parallel south, the most western part of the border with New South Wales. The border follows this latitude towards the coast at about the 154th meridian east before following the courses of a number of rivers, then across a number of mountain ranges until it reaches Point Danger. These rivers are the Macintyre River, Severn River and Weir Rivers, all tributaries of the Barwon River itself a tributary of the Darling River. Southern border towns include Mungindi, Goondiwindi and Texas. 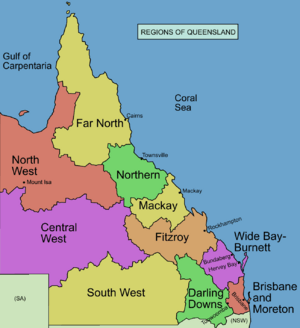 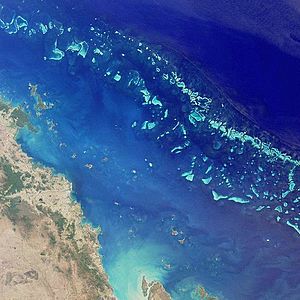 The Great Barrier Reef, with the Whitsunday Islands in the north and Shoalwater Bay in the south 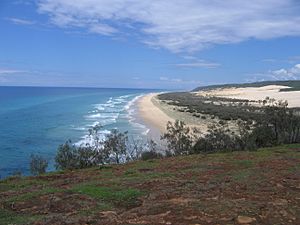 Fraser Island, the largest sand island in the world lies off the coast of Queensland. There are half of the world's perched or dune lakes on Fraser Island. These rare lakes, which total 80 of this type worldwide, are formed in depressions between sand dunes and have no natural inflow or outflow. Magnetic Island, Heron island, Great Keppel Island, Hamilton Island and the Whitsunday Islands are known for their tourist resorts. Mornington Island and Great Palm Island sustain large aboriginal communities. In the Torres Strait Thursday Island is the administrative and commercial centre of the Torres Strait Islands. Hinchinbrook Island, a large, mountainous island offshore from Cardwell, is completely preserved within the national park. North West Island is a coral cay that sustains important nesting grounds for sea birds and turtles. 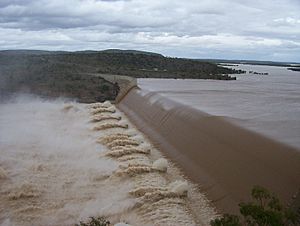 To the north west of Queensland is the Gulf of Carpentaria. North of Cape York Peninsula is Torres Strait with many Torres Strait Islands, the most northerly of which is Boigu Island at the 10th parallel south. To the east of Queensland lies the Coral Sea, part of the Pacific Ocean. Major bays along the coast include Princess Charlotte Bay, Shoalwater Bay north of Yeppoon, Hervey Bay between Fraser Island and the mainland, Trinity Bay off Cairns and Moreton Bay off Brisbane. The Great Sandy Strait is a passage extending south of Hervey Bay, between the mainland and Fraser Island. Beaches on the Gold Coast and the Sunshine Coast are long and sandy, attracting tourists including surfers. Further north the waves are dampened by the barrier reefs.

Queensland's largest dam is the Burdekin Dam, followed by Lake Awoonga. There are no large natural lakes in the state. There are a few natural lakes created by volcanic craters and coastal lagoons mainly in South East Queensland. The lakes in the arid and semi-arid regions of Queensland experience low, highly variable rates of rainfall together with very high evaporation rates. 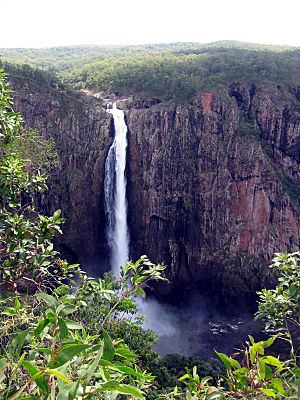 Wallaman Falls have the longest drop of any waterfall in Australia, 2007

Queensland contains hundreds of rivers and many more smaller creeks. The discharge from these rivers, particularly in the tropical north of the state, accounts for 45% of the nation's surface runoff. Major coastal rivers include the Mitchell River, Fitzroy River, Mary River and Brisbane River with the Flinders River being the longest at 840 km (520 mi). Inland are the northern tributaries of the Murry River including the Maranoa River, Warrego River and Condamine River. Rivers of the Lake Eyre Basin include Cooper Creek with its two major tributaries Thomson River and the Barcoo River as well as the Georgina River. The Wenlock River contains the highest diversity of freshwater fish of all Australian rivers.

Barron Falls in the north of the state is one of the most striking. During heavy rains the landscape is transformed into a gushing torrent. Similarly Purlingbrook Falls in the Gold Coast Hinterland is most spectacular after strong downpours. Wallaman Falls west of Ingham in North Queensland is Australia's largest single drop waterfall. Other notable waterfalls include Milla Milla Falls, Purlingbrook Falls and Coomera Falls.

Some of Queensland's towns are located on relatively flat land on the banks of rivers. During severe floods, such as the 2010 Queensland floods, numerous towns are inundated as flood waters rise. Levees have alleviated some minor flooding but after prolonged periods of heavy rainfall the sheer volume of flood waters cannot be held back. Disruptions from flooding have become accepted in inland towns like Charleville and to a lesser degree in coastal towns such as Gympie.

Eastern Queensland is dominated by the Great Dividing Range in contrast to the low-relief of western areas. East of the Great Dividing Range is a narrow coastal strip, known as the Australian north-east coast drainage division which contains most of the state's population. It is along this strip that the state's most important agricultural product, sugar cane, is grown in the fertile soils and moist climate.

Other elevated areas include eastern parts of the Barkly Tableland, Atherton Tablelands, Central Highlands containing Carnarvon Gorge and the Granite Belt, Queensland's primary wine-producing region. The Bunya Mountains an isolated spur of the Great Divide are especially scenic and provide important habitat in a region that has suffered from excess land clearing. Closer to the coast is the Glasshouse Mountains, a series of volcanic plugs which were named by the explorer Captain James Cook. Another natural wonder is the series of mountain ranges in South East Queensland known as the Scenic Rim. 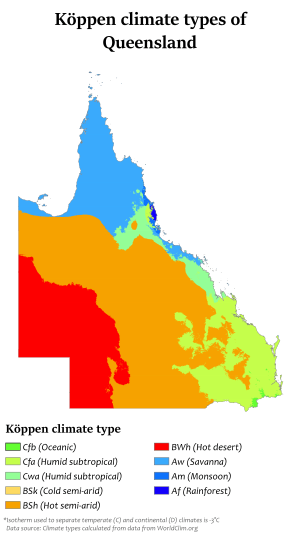 The coastal strip, east of the Great Dividing Range, has a moist, warm temperate climate. West of the range both the minimum temperatures and rainfall rates decrease while the days are hotter. In the north of the state there is a monsoon season. Tropical cyclones cross the coast regularly, sometimes providing good rainfall inland. 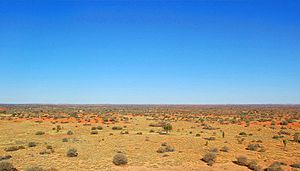 Much of western Queensland is arid, with some desert areas. The Sturt Stony Desert, Strzelecki Desert and the Simpson Desert are partially located in Queensland. Drought has had a significant impact on Queensland rural communities, both socially and economically.

The east coast of Australia, including what is now known as Queensland was first explored by James Cook but for thousands of years before it was occupied by Indigenous Australians. The capital of Queensland is Brisbane. Queensland uses the Australian Eastern Standard Time Zone, but does not adjust in summer for daylight saving. Mining and agriculture, particularly sugar cane harvesting, are the state's main industries.

The Great Artesian Basin is an important water source for the state. Through the drilling of bores it has allowed a sheep and cattle industry to thrive in the arid Mitchell grass, Mulga and Spinifex plains in western and central regions. Significant man-made features include the Dingo Fence, an extensive rail network and numerous highways.

Queensland's capital city, Brisbane is located in the most populous region South East Queensland. Also located here is the Gold Coast, Ipswich, Logan, Redcliffe City and Toowoomba the second largest inland city in Australia is located 120 km west of Brisbane on the Darling Downs as well as Warwick.

Townsville is the largest city in the state's north. Other cities in the north of the state include Mount Isa a mining town, Charters Towers, Mackay, the country's biggest exporter of sugar and one of the largest coal exporters in the country and Cairns. In the central regions of the state are the cities of Rockhampton, Bundaberg, Gladstone with its economically important coal exporting port facilities, Maryborough and Hervey Bay. The largest ports in Queensland are the Port of Gladstone, followed by the Port of Brisbane and then the Port of Townsville.

Some Queensland towns and settlements are known as aboriginal communities. Palm Island and Cherbourg are two of the more well-known examples. 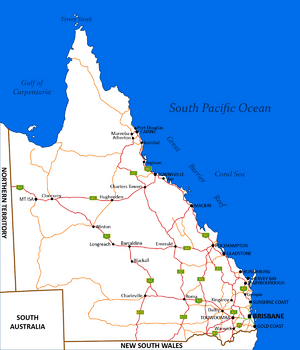 Rail networks extend along the eastern coast from the Gold Coast to Kuranda. Major branch lines extend inland to Longreach and Charleville and Mount Isa. The Pacific Highway links Brisbane and Sydney along the coast while the New England links the cities inland. The Newell Highway connects Goondiwindi to the southern states via central New South Wales. The Bruce Highway, which travels along the coast from Brisbane to Townsville, has sections near Gympie which were described in a 2006 report as some of the worst national highway in Australia.

Queensland contains significant areas of rainforest and other areas of biological diversity. World Heritage Areas include the Great Barrier Reef, Wet Tropics of Queensland and Gondwana Rainforests of Australia. Queensland has 226 national parks. The largest is Simpson Desert National Park in the remote central west of the state. The most visited national parks in South East Queensland are Tamborine National Park, Lamington National Park and Noosa National Park. These parks are located near centres of major population and are the most accessible in the state. Lamington and other parks around the Scenic Rim such as Main Range National Park, are included in the World Heritage listed Gondwana Rainforests of Australia.

All content from Kiddle encyclopedia articles (including the article images and facts) can be freely used under Attribution-ShareAlike license, unless stated otherwise. Cite this article:
Geography of Queensland Facts for Kids. Kiddle Encyclopedia.