Wildlife of Missouri facts for kids 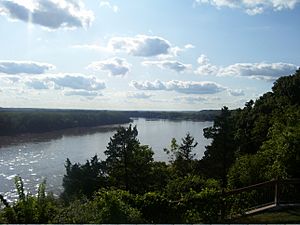 Some of the native species found in Missouri include:

Within historic times, pronghorn, gray wolf, and brown bear were all found in Missouri, but have since been eliminated. Wapiti and American bison were formerly common, but are currently confined to private farms and parks.

Within historic times, the passenger pigeon, the carolina parakeet, and the ivory-billed woodpecker were all found in Missouri, but they have since been eliminated.

The trees and shrubs growing in Missouri include the following:

There has also been a migration of insects from the south to Missouri. One example of this is the wasp Polistes exclamans.[[Categoryee also ==

All content from Kiddle encyclopedia articles (including the article images and facts) can be freely used under Attribution-ShareAlike license, unless stated otherwise. Cite this article:
Wildlife of Missouri Facts for Kids. Kiddle Encyclopedia.