Mexico (Spanish: México, official name: United Mexican States (Spanish: Estados Unidos Mexicanos, ) is a country in North America. Mexico is south of Texas and other American states. Guatemala and Belize are south of Mexico. Mexico is between the Pacific Ocean and the Gulf of Mexico.

People living in Mexico or who are from there are called Mexicans. Most Mexican people speak Spanish. There are also Mexicans who speak Native American languages, like Nahuatl, Maya, and Zapotec. The capital of Mexico is Mexico City.

Before the Europeans came, many Native American cultures existed in Mexico. The earliest was the Olmec culture in the south. The Olmecs are famous for the large stone heads they made. On the Yucatán peninsula lived the Mayans. The Mayans lived in city states ruled by kings. The Mayans were most powerful between 200 and 900 A.D. Another powerful empire belonged to Teotihuacan. Teotihuacan was a very large city, one of the largest at that time. After Teotihuacan declined the Toltecs became powerful. Things made by the Toltecs have been found from the southern parts of the U.S. all the way to Costa Rica. A famous Toltec god is Quetzalcoatl. The Toltec culture declined too, and it was succeeded by the Aztecs. The Aztecs called their own empire Mexico. A famous Aztec king was Moctezuma II. 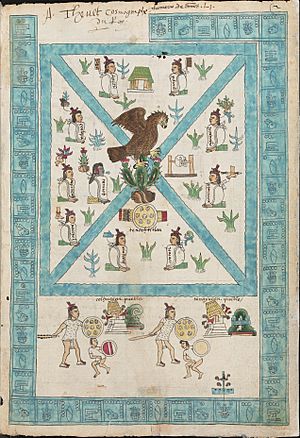 Depiction of the founding myth of Mexico-Tenochtitlan from the Codex Mendoza. 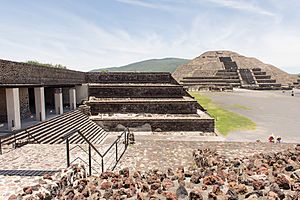 View of the Pyramid of the Moon and entrance to the Quetzalpapálotl Palace. During its peak in the Classic era, Teotihuacan dominated the Valley of Mexico and exerted political and cultural influence in other areas, such as in the Petén Basin.

In 1519 the Spanish explorer Hernán Cortés came to Mexico. The Aztecs thought he was the returned Quetzalcoatl, so they did not want to fight against him. Cortes allied himself with the enemies of the Aztecs. In 1521 they conquered the Aztec capital Tenochtitlan. The Aztec Empire became part of Spain. It was called New Spain.

In 1810 the Mexican priest Miguel Hidalgo started the Mexican war of independence. In 1821 the Spanish finally retreated and Mexico became independent. The first leader of independent Mexico was Agustin de Iturbide. He set up the First Mexican Empire and became emperor. But the Mexicans were not happy with him, and in 1823 the country became a republic.

A man who was very important in Mexico in the early 19th century was Antonio López de Santa Anna. He was the president of Mexico 11 times. When he became a dictator, Texas declared independence (1836). The Battle of the Alamo was part of this Texas Revolution. Between 1846 and 1848 there was war between Mexico and the United States. In this war Mexico lost its large northern areas, which became the southwestern United States. After this war Santa Anna was sent away to Venezuela.

Between 1858 and 1861 there was war again, between liberals and conservatives. The liberal Benito Juárez won the war and became president afterwards. Juarez stayed president until France invaded Mexico and made Maximilian of Habsburg emperor of the Second Mexican Empire. But Maximilian was very unpopular. After more war he was executed in 1867, and Juarez became president again.

Conservatives thought Juarez had too much power. In 1876 they ousted him, and made Porfirio Díaz, a general who had won a battle against the French, president. Porfirio Díaz made the country wealthier, but the poor people became poorer. Franciso I. Madero started the Mexican Revolution in 1910.

The next 10 years the country was in chaos. There were many presidents who ruled for a short time and all kinds of people fought against each other. Famous people from this period are Emiliano Zapata, Pancho Villa and Francisco I. Madero. When Álvaro Obregón became president in 1920 the fighting calmed down.

In 1929 President Plutarco Elías Calles founded the National Mexican Party, PNM. The party was later renamed Institutional Revolutionary Party, PRI. The party would rule for a very long time. Most PRI presidents were not popular, it was said that they were only president to become richer themselves. An exception was president Lázaro Cárdenas. He was president between 1934 and 1940.

After several decades more and more people became unhappy with the PRI. In 1968 security forces shot at protesters, this caused several hundred deaths and became known as the Tlatelolco massacre. Another uprising was in 1994 when Zapatistas rebelled in the province Chiapas.

Mainly through ballot box fraud the PRI managed to stay into power until 2000, when Vicente Fox of the National Action Party, PAN, was elected president. In total the PRI had governed Mexico for 71 years.

Mexico is a constitutional federal democracy ruled by a president. The president is elected every 6 years. The current president is Andrés Manuel López Obrador. Parliament has a Senate and House of Deputies.

Mexico is in the southern part of North America. It is roughly shaped like a triangle. Mexico is more than 3000 km (1,850 miles) long from northwest to southeast. Mexico is between two large seas: the Pacific Ocean in the West and the Gulf of Mexico and the Caribbean Sea in the East. Mexico has two large peninsulas. Baja California in the northwest, and Yucatán in the southeast. In central and western Mexico are the Sierra Madre mountains. In the Sierra Madre is the Pico de Orizaba, the highest mountain of Mexico. In central Mexico there are also a few volcanoes like the Popocatépetl and the Iztaccíhuatl. The Pico de Orizaba is also a volcano. In the north of Mexico are deserts. In the south are tropical rainforests. Some rivers in Mexico are the Río Bravo (known in the US as the Rio Grande), the Río Balsas, the Río Pánuco, and the Río Yaqui. 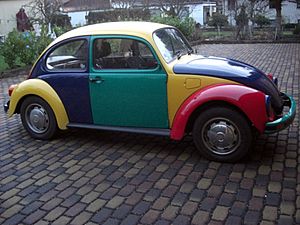 Mexico produces the most automobiles of any North American nation. The industry produces technologically complex components and engages in some research and development activities. The "Big Three" (General Motors, Ford and Chrysler) have been operating in Mexico since the 1930s, while Volkswagen and Nissan built their plants in the 1960s. In Puebla alone, 70 industrial part-makers cluster around Volkswagen. In the 2010s expansion of the sector was surging. In 2014 alone, more than $10 billion in investment was committed. In September 2016 Kia motors opened a $1 billion factory in Nuevo León, with Audi also opening an assembling plant in Puebla the same year. BMW, Mercedes-Benz and Nissan currently have plants in construction. 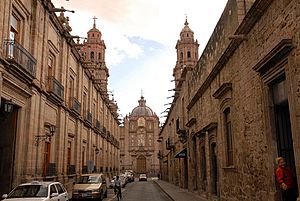 Street in the historic center of Morelia. Mexico has historical architecture in most of its towns being the country with the highest number of Colonial buildings and structures in all of the Americas and also placing a vast number of Pre-colonial monuments.

The most notable attractions are the Mesoamerican ruins, cultural festivals, colonial cities, nature reserves and the beach resorts. The nation's wide range of climates, from temperate to tropical, and unique culture – a fusion of the European and the Mesoamerican – make Mexico an attractive destination. The peak tourism seasons in the country are during December and the mid-Summer, with brief surges during the week before Easter and Spring break, when many of the beach resort sites become popular destinations for college students from the United States.

The first chocolate version (liquid) was made by indigenous people in present-day Mexico, and was exported from Mexico to Europe after the Spanish conquest. 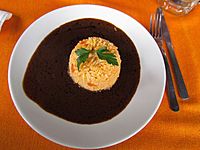 Mole sauce, which has dozens of varieties across the Republic, is seen as a symbol of Mexicanidad and is considered Mexico's national dish.

In 2005, Mexico presented the candidature of its gastronomy for World Heritage Site of UNESCO, being the first occasion in which a country had presented its gastronomic tradition for this purpose. However, in a first instance the result was negative, because the committee did not place the proper emphasis on the importance of corn in Mexican cuisine. Finally, on November 16 of 2010 Mexican gastronomy was recognized as Intangible cultural heritage by UNESCO.

The origin of the current Mexican cuisine is established during the Spanish colonization, being a mixture of the foods of Spain and the native indigenous. Of foods originated in Mexico is the corn, the pepper vegetables (together with Central and South America), calabazas (together with the Americas), avocados, sweet potato (together with Central and South America), the turkey (together with the Americas) and other fruits and spices. Other Indigenous products are many beans. Similarly, some cooking techniques used today are inherited from pre-Hispanic peoples, such as the nixtamalization of corn, the cooking of food in ovens at ground level, grinding in molcajete and metate. With the Spaniards came the pork, beef and chicken meats; peppercorn, sugar, milk and all its derivatives, wheat and rice, citrus fruits and another constellation of ingredients that are part of the daily diet of Mexicans.

From this meeting of millennia old two culinary traditions, were born pozole, mole sauce, barbacoa and tamale is in its current forms, the chocolate, a large range of breads, tacos, and the broad repertoire of Mexican street foods. Beverages such as atole, champurrado, milk chocolate and aguas frescas were born; desserts such as acitrón and the full range of crystallized sweets, rompope, cajeta, jericaya and the wide repertoire of delights created in the convents of nuns in all parts of the country.

All content from Kiddle encyclopedia articles (including the article images and facts) can be freely used under Attribution-ShareAlike license, unless stated otherwise. Cite this article:
Mexico Facts for Kids. Kiddle Encyclopedia.