Nitrogen is a nonmetal chemical element. The atmosphere contains more than 78 percent of nitrogen. It has the chemical symbol N and atomic number 7. Its stable inside typically contains 14 nucleons (7 protons and 7 neutrons). It has 5 electrons in its outer shell. 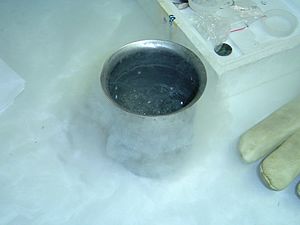 Nitrogen is a colorless odorless gas at normal temperature. It is normally attached to another nitrogen atom, making a nitrogen molecule (N2). The bond is very strong. That is why many explosives contain nitrogen. The bond is broken when the explosive is made. When it explodes the bond forms, releasing a lot of energy.

It usually does not combine with other atoms because of its strong bond. The bond prevents it from reacting. Lithium is one of the only chemical elements that react with nitrogen without being heated. Magnesium can burn in nitrogen. Nitrogen also makes blue electric sparks. The blue color is caused by the atoms being excited. When they get normal again, they release light. When nitrogen is excited, it reacts with many things that it does not normally react with. 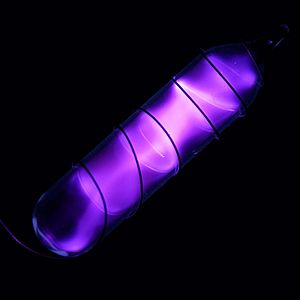 A nice electric spark through a tube filled with nitrogen

Many chemical compounds that are important for industrial purposes contain nitrogen ions. These include ammonia, nitric acid, nitrates and cyanides. Nitrogen comes in several oxidation states; -3, -2, -1/3, +1, +3, +4, and +5. Each of those oxidation states has its set of compounds.

Compounds containing nitrogen in the +5 oxidation state are strong oxidizing agents. They are one of the more common groups of nitrogen compounds. They include nitric acid and dinitrogen pentoxide. They also include nitrates, which are used in explosives such as dynamite, nitroglycerin and trinitrotoluene.

Air is made up of about 78% nitrogen and about 20.95% oxygen, < 1% argon, and traces of other gasses such as carbon dioxide, and water vapor, among others. It is also in a few nitrates in the ground. Ammonium minerals are rare. Nitrogen is in proteins.

Pure liquid nitrogen can be made by cooling air. The nitrogen turns into a liquid at a different temperature than the oxygen. It can also be made by heating certain chemical compounds, such as sodium azide.

Nitrogen compounds have many uses, such as anesthetics (nitrous oxide), explosives (dynamite), cleaners (ammonia), and meat (protein), and planes (fuel).

Nitrogen was discovered by Daniel Rutherford in 1772, who called it noxious gas or fixed gas. They discovered that part of air did not burn. It was found that animals died in it. It was known as "azote". Many nitrogen compounds also contain the "azide" or "azine" letters, such as hydrazine.

In 1910, Lord Rayleigh found out that when a spark was passed through nitrogen, it made a reactive form of nitrogen. This nitrogen reacted with many metals and compounds.

Nitrogen is not poisonous. We can safely breathe it when it is a part of air, but we cannot breathe pure nitrogen by itself, because it does not have the oxygen that we need to live. Anyone that inhales pure nitrogen will just pass out.

All content from Kiddle encyclopedia articles (including the article images and facts) can be freely used under Attribution-ShareAlike license, unless stated otherwise. Cite this article:
Nitrogen Facts for Kids. Kiddle Encyclopedia.