Kids Encyclopedia Facts
(Redirected from Bharat)
This page is about the Republic of India. For other uses, see India (disambiguation).

India has seven neighbours: Pakistan in the north-west, China and Nepal in the north, Bhutan and Bangladesh in the north-east, Myanmar in the east and Sri Lanka, an island, in the south.

The capital of India is New Delhi. India is a peninsula, bound by the Indian Ocean in the south, the Arabian Sea on the west and Bay of Bengal in the east. The coastline of India is of about 7,517 km (4,671 mi) long. India has the third largest military force in the world and nuclear weapons.

India gets its name from the Greek word, Indus. It means "the people who live near the Indus River."

India's economy became the world's fastest growing major economy in the last quarter of 2014, replacing the People's Republic of China. India GDP grew 7.6% in 2015-16 and as a result, it continues to remain the world's fastest growing major economy. India's literacy and wealth are also rising. According to New World Wealth, India is the seventh richest country in the world with a total individual wealth of $5.6 trillion. However, it continues to face many social and economic issues like poverty and corruption.

India is a founding member of the World Trade Organisation (WTO), and has signed the Kyoto Protocol.

India has the fourth largest number of spoken languages per country in the world, only behind Papua New Guinea, Indonesia, and Nigeria. People of many different religions live there, including the five most popular world religions: Christianity, Islam, Hinduism, Buddhism, and Sikhism. The latter three religions came from the Indian subcontinent.

The National emblem of India shows four lions standing back-to-back. The lions symbolise power, pride, confidence, and courage (bravery). Only the government can use this emblem, according to the State Emblem of India (Prohibition of Improper Use) Act, 2005. 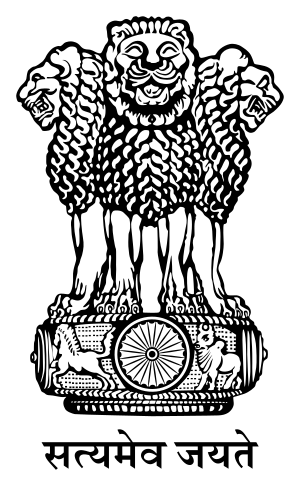 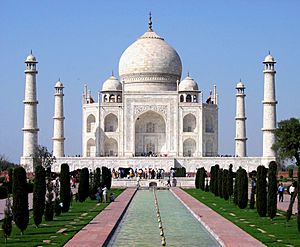 The Taj Mahal in Agra was built by Shah Jahan as a memorial to his wife Mumtaz Mahal. It is a UNESCO World Heritage Site. It is thought to be of "outstanding universal value".
Main page: History of India

Two of the main Classical languages of the world— Sanskrit and Tamil, were born in India. Both of these languages are more than 3000 years old. The country founded a religion called Hinduism, which most Indians still follow. Later, a king called Chandragupt Maurya built an empire called the Maurya Empire in 300 BC. It made most of South Asia into one whole country. From 180 BC, many other countries invaded India. Even later (100 BC  — AD 1100), other Indian dynasties (empires) came, including the Chalukyas, Cholas, Pallavas, and Pandyas. South India at that time was famous for its very good science, art, and writing.

Many dynasties ruled India around the year 1000. Some of these were the Mughal, Vijayanagara, and the Maratha empires. In the 1600s, European countries invaded India, and the British controlled most of India by 1856.

In the early 1900s, millions of people peacefully started to protest against British control. One of the people who were leading the freedom movement was Mahatma Gandhi, who only used peaceful tactics, including a way called "ahimsa", which means "non-violence". On 15 August 1947, India peacefully became free and independent from the British Empire. India's constitution was founded on 26 January 1950. Every year, on this day, Indians celebrate Republic Day. The first official leader (Prime Minister) of India was Jawaharlal Nehru.

After 1947, India has had a socialist planned economy. It is one of the founding members of the Non-Aligned Movement and the United Nations. It has fought many wars since independence from Britain, including in 1947-48, 1965, 1971, and 1999 with Pakistan and in 1962 with China. It also fought a war to capture Goa, a Portuguese-built port and city which was not a part of India until 1961. The Portuguese refused to give it to the country, and so India had to use force and the Portuguese were defeated. India has also done nuclear tests in 1974 and 1998, and it is one of the few countries that has nuclear bombs. Since 1991, India has been one of the fastest-growing economies in the world. 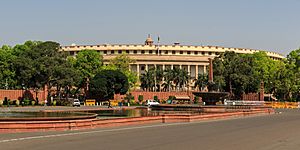 India is the largest democracy in the world.

The judicial branch is made up of the courts of India, including the Supreme Court. The Chief Justice of India is the head of the Supreme Court. Supreme Court members have the power to stop a law being passed by Parliament if they think that the law is illegal and contradicts (opposes) the Constitution of India. In India, there are also 24 High Courts. 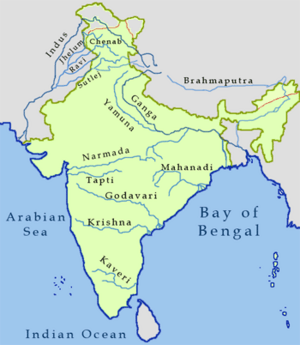 India is the seventh largest country in the world. It is the main part of the Indian subcontinent. The countries next to India are Pakistan, Bangladesh, Myanmar, China, Bhutan, and Nepal. It is also near Sri Lanka, an island country.

India is a peninsula, which means that it is surrounded on three sides by water. One of the seven wonders of the world is located in Agra the Taj Mahal. In the west is the Arabian Sea, in the south is the Indian Ocean, and in the east is the Bay of Bengal. The northern part of India has many mountains. The most famous mountain range in India is the Himalayas, which have some of the tallest mountains in the world. There are many rivers in India. The main rivers are the Ganges, the Brahmaputra, the Yamuna, the Godavari, the Kaveri, the Narmada, and the Krishna.

India has different climates. In the South, the climate is mainly tropical, which means it can get very hot in summer and cool in winter. The northern part, though, has a cooler climate, called sub-tropical, and even alpine in mountainous regions. The Himalayas, in the alpine climate region, can get extremely cold. There is very heavy rainfall along the west coast and in the Eastern Himalayan foothills. The west, though, is drier. Because of some of the deserts of India, all of India gets rain for four months of the year. That time is called the monsoon. That is because the deserts attract water-filled winds from the Indian Ocean, which give rain when they come into India. When the monsoon rains come late or not so heavily, droughts (when the land dries out because there is less rain) are possible.

The Indian Armed Forces is the military of India. It is made up of an Army, Navy and Air Force. There are other parts like Paramilitary and Strategic Nuclear Command.

The President of India is its Commander-in-Chief. However, it is managed by the Ministry of Defence. In 2010, the Indian Armed Forces had 1.32 million active personnel. This makes it one of the largest militaries in the world.

Currently, the Indian Army is becoming more modern by buying and making new weapons. It is also building defences against missiles of other countries. In 2011, India imported more weapons than any other nation in the world.

From its independence in 1947, India fought four wars with Pakistan and one war with China. 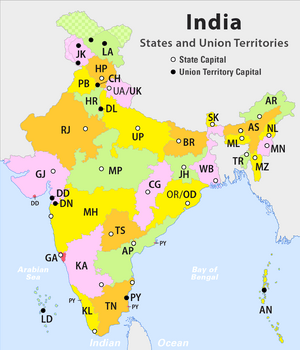 Trouble with the borders

There are disputes about certain parts of the Indian borders. Countries do not agree on where the borders are. Pakistan and China do not recognise the disputed territory of Jammu and Kashmir. The Indian government claims it as an Indian state. Similarly, the Republic of India does not recognise the Pakistani and Chinese parts of Kashmir.

In 1914, British India and Tibet agreed on the McMahon Line, as part of the Simla Accord. In July 1914, China withdrew from the agreement. Indians and Tibetans see this line as the official border. China does not agree, and both mainland China and Taiwan do not recognize that Arunachal Pradesh belongs to India. According to them, it is a part of South Tibet, which belongs to China. 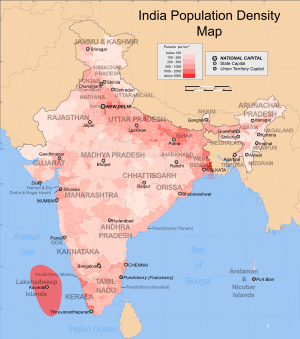 This is a map of the population density of India.

There are 1.12 billion people living in India. India is the second largest country by the number of people living in it, with China being the first. Experts think that by the year 2030, India will be the first. About 70% of Indians live in rural areas, or land set aside for farming. The largest cities in India are Mumbai, Kolkata, Delhi, Chennai, Bangalore, Hyderabad, and Ahmedabad. India has 23 official languages. Altogether, 1,625 languages are spoken in India.

Hindi is the official language in India with the largest number of speakers. It is the official language of the union. Native speakers of Hindi represent about 41% of the Indian population (2001 Indian census). English is also used, mostly for business and in the administration. It has the status of a 'subsidiary official language'. The constitution also recognises 21 other languages. Either many people speak those languages, or they have been recognised to be very important for Indian culture. The number of dialects in India is as high as 1,652.

Cave paintings from the Stone Age are found across India. They show dances and rituals and suggest there was a prehistoric religion. During the Epic and Puranic periods, the earliest versions of the epic poems Ramayana and Mahabharata were written from about 500–100 BCE, although these were orally transmitted for centuries before this period. Other South Asian Stone Age sites apart from Pakistan are in modern India, such as the Bhimbetka rock shelters in central Madhya Pradesh and the Kupgal petroglyphs of eastern Karnataka, contain rock art showing religious rites and evidence of possible ritualised music.

The Harmandir Sahib or The Golden Temple of the Sikhs.

Several modern religions are linked to India, namely modern Hinduism, Jainism, Buddhism and Sikhism. All of these religions have different schools (ways of thinking) and traditions that are related. As a group they are called the Eastern religions. The Indian religions are similar to one another in many ways: The basic beliefs, the way worship is done and several religious practices are very similar. These similarities mainly come from the fact that these religions have a common history and common origins. They also influenced each other.

It's the first time ever since independence that Hindu population percentage fell below 80%.

India sent a spacecraft to Mars for the first time in 2014. That made it the fourth country and only Asian country to do so. India is the only country to be successful in its very first attempt to orbit Mars. It was called the Mars Orbiter Mission.

India has the largest movie industry in the world. Based in Mumbai (formerly Bombay), the industry is also known as Bollywood (an obvious play on Hollywood). It makes 1,000 movies a year, about twice as many as Hollywood. 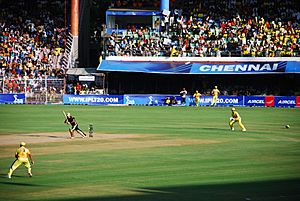 India's official national sport is field hockey which is controlled by the Indian Hockey Federation. They have also won eight gold, one silver and two bronze medals at the Olympic games. However, cricket is the most popular sport in India. The Indian cricket team won the 1983 and 2011 Cricket World Cup and the 2007 ICC World Twenty20. They shared the 2002 ICC Champions Trophy with Sri Lanka and won the 2013 ICC Champions Trophy.Cricket in India is controlled by the Board of Control for Cricket in India or BCCI. Domestic tournaments are the Ranji Trophy, the Duleep Trophy, the Deodhar Trophy, the Irani Trophy and the Challenger Series. There is also the Indian cricket league and Indian premier league Twenty20 competitions.

Tennis has become popular due to the victories of the India Davis Cup team. Association football is also a popular sport in northeast India, West Bengal, Goa and Kerala. The Indian national football team has won the South Asian Football Federation Cup many times. Chess, which comes from India, is also becoming popular. This is with the increase in the number of Indian Grandmasters. Traditional sports include kabaddi, kho kho, and gilli-danda, which are played throughout India.

All content from Kiddle encyclopedia articles (including the article images and facts) can be freely used under Attribution-ShareAlike license, unless stated otherwise. Cite this article:
India Facts for Kids. Kiddle Encyclopedia.