List of U.S. National Parks by elevation facts for kids 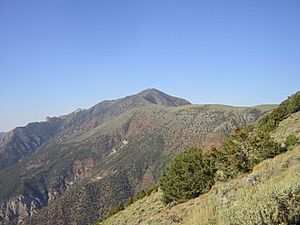 Death Valley National Park, notorious for its below sea level desert, also has soaring mountains, including Telescope Peak, its highest.

This is a list of United States National Parks by elevation. Most of America's national parks are located in mountainous areas. Even among those located close to the ocean, not all are flat. Those few that are low-lying preserve important natural habitats that could never exist at high altitude. Several national parks protect deep canyons with great vertical relief. There are also three national parks whose primary features are caves, the depths of which are still being explored.

Highest and lowest points in each US National Park

Criteria: Points on this list are the highest and lowest points within each national park and its associated national preserve, if it has one. It does not include adjacent or associated national recreation areas, parkways, memorials, or forests, but does include private property within park boundaries. Footnotes are given to mention other notable high or low points, when appropriate.

All content from Kiddle encyclopedia articles (including the article images and facts) can be freely used under Attribution-ShareAlike license, unless stated otherwise. Cite this article:
List of U.S. National Parks by elevation Facts for Kids. Kiddle Encyclopedia.