Cuisine of the United States facts for kids

Because America has long attracted immigrants from a wide variety of nations and cultures, it is no surprise that the cuisine of the United States is extremely diverse and difficult to define. One way of describing American cuisine is a synthesis of cuisines from around the world, a style of cooking that takes something from each immigrant community. On the other hand, American cooks have exported a great variety of dishes around the world, and in many ways American cuisine is just as recognisable and as popular as French, Chinese, or Indian. 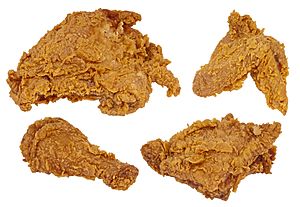 The cuisine of the Native Americans was of course the first American cooking style, and it lent a great deal not only to subsequent American cooking but also to culinary styles around the world. Turkey, corn (maize), beans, sunflowers, potatoes, peppers, and various forms of squash (including pumpkins) are among the Native American foods now widely consumed elsewhere. Superimposed on this original native diet is the massive contribution of the various immigrant groups; many dishes considered quintessentially American are in fact based upon the cooking traditions of other countries. For example, apple pies, pizza, runzas, chowder, and hamburgers are all either identical to, or derived from, European dishes. Burritos and tacos similarly have their origins in Mexico.

Another factor that makes defining American cuisine difficult is that much of it is rustic rather than elaborate, some aspects of American food culture are not immediately recognised as cuisine. Salt water taffy, clam chowder, baked beans, barbecue, candy bars, and most fast-food items are some of the better known examples.

The origins of American cuisine

The hamburger may be the most famous United States food

Some describe American cuisine as the result of each immigrant community simply making use of whatever they could grow in their new home, or incorporating America's native plants and game animals in traditional recipes. As a result, one important characteristic of American cooking is the fusion of multiple ethnic or regional approaches into completely new cooking styles. The cuisine of the South, for example, has been heavily influenced by immigrants from Africa, France, and Mexico, among others. Asian cooking has played a particularly large role in American fusion cuisine.

Similarly, while some dishes considered typically American may have their origins in other countries, American cooks and chefs have substantially altered them over the years, to the degree that the dish as now enjoyed the world over may even be considered archetypically American. Hot dogs and hamburgers are both based on traditional German dishes, brought over to America by German immigrants to the United States, but in their modern, popular form they are so altered that they can be reasonably considered American dishes. 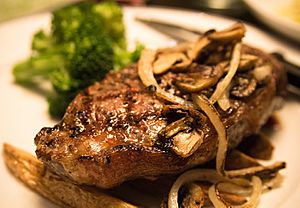 Given the United States' large size it is not surprising that its cuisine is typified by distinct regional variations. The cuisine of the East Coast, for example, makes use of fish and seafood to much greater degree than that of the Midwest, where corn and beef were long more readily available. To some degree, easy transportation of perishable foodstuffs has diminished these regional differences in recent years, but many Americans still associate certain foods with specific places, such as steak with Omaha, lobster with Maine, and Blue Crab and Crabcake with Maryland.

Many of the dishes that were imported from elsewhere have been elaborated extensively once adopted by Americans. Pizza, hamburgers, and ice cream are dishes imported from Europe but have achieved a diversity within the United States far exceeding anything found in their home countries. Furthermore, American cooking has been widely exported beyond its borders. Tex-Mex, Creole, and barbecue restaurants can be found in cities all around the world, while fast-food burger bars and pizzerias are even more popular.

All content from Kiddle encyclopedia articles (including the article images and facts) can be freely used under Attribution-ShareAlike license, unless stated otherwise. Cite this article:
Cuisine of the United States Facts for Kids. Kiddle Encyclopedia.