Kids Encyclopedia Facts
(Redirected from List of towns in Massachusetts)

Map of the United States with Massachusetts highlighted

Boston, largest city of the Commonwealth of Massachusetts 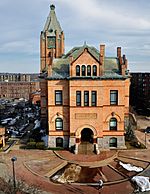 The following tabular list shows the 55 government divisions of the Commonwealth which have been officially granted the right to use the city form of government along with the official name in use by each municipality. 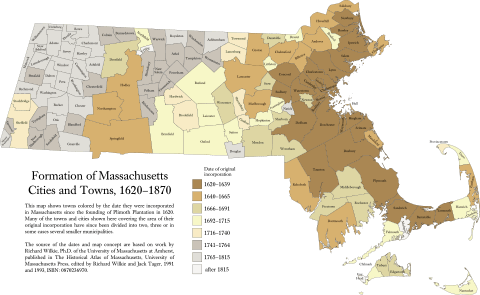 The following towns were ceded the Rhode Island colony in 1747 as part of a border dispute:

The following towns joined the Connecticut Colony in the late 1749 after separating from Springfield or just joining Connecticut.

The following towns joined from the Province of New Hampshire from 1641 to 1680 since the government at the time was not strong enough.

Also all settlements in the District of Maine were ceded when the state of Maine gained its independence from Massachusetts in 1820 as part of the Missouri Compromise, and numerous towns were ceded to New Hampshire after the Northern boundary of Massachusetts was defined by royal decree.