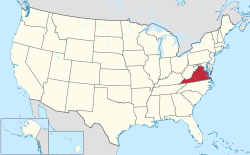 Map of the United States with Virginia highlighted

Virginia counties and cities by year of establishment

Virginia is a state located in the Southern United States. Since 1871, all cities in Virginia have been independent cities, which are administratively independent of any county. As of 2014[update], there are 38 independent cities, which are considered county-equivalents for census purposes. Many towns are as large as cities, but are not incorporated as cities and are situated within a parent county or counties. Eight independent cities—including Bedford, which gave up its city charter in 2013 and became a town—had 2010 populations of less than 10,000 with the smallest, Norton, having a population of only 3,958. In 2010, the largest towns were Blacksburg (with 42,620 people) and Leesburg (42,616). Four other towns also had populations of over 10,000 people. For a complete list of these towns, see List of towns in Virginia. For major unincorporated population centers, see List of unincorporated towns in Virginia.

Virginia's independent cities were classified by the Virginia General Assembly in 1871 as cities of the first class and cities of the second class. The Virginia Constitution of 1902 included defined first class cities as those having a population of 10,000 or more based upon the last census enumeration while second class cities were those that had a population of less than 10,000. Cities which previously been granted a city charter, but did not have the requisite population, had their status grandfathered in. Second class did not have a court of record and were required to share the cost of that court with their adjacent county and also shared the cost for three constitutional officers of that court—generally, the clerk, commonwealth attorney and sheriff—and those shared officers stood for election in both the city and the county. At least two constitutional officers—treasurer and commissioner of the revenue—were required to be elected solely by the residents of the city. The distinction between first and second class cities was ended with the Virginia Constitution of 1971. However, cities that were classified as second class cities at the time of the adoption of the 1971 Virginia Constitution were authorized to continue sharing their court system and three constitutional officers with the adjacent county. As of 2003[update], 14 of Virginia's independent cities retain these features.

Virginia counties and cities by population in 2010.

Virginia counties and cities by population change from 2000 to 2010, in percentage.

All content from Kiddle encyclopedia articles (including the article images and facts) can be freely used under Attribution-ShareAlike license, unless stated otherwise. Cite this article:
List of cities in Virginia Facts for Kids. Kiddle Encyclopedia.